Ski-Doo arrives at Model Year 2012 with 141 ways to configure its sleds, one of which should suit any rider. In its line up of MXZ, Grand Touring, GSX, Renegade, Freeride, Summit, Tundra and Expedition, this snowmobile pioneer offers refinements and individual features that give it so many variations. In actual fact, snowmobilers will look first at how they want to ride and then choose from the main Ski-Doo menu of models, adding features to create a unique ride for themselves.

To offer you the opportunity to fit your ride to your riding style, Ski-Doo expands its early season “Spring Build” program to allow you to choose one of its most popular 2012 models like the MXZ, Summit, Freeride or Renegade and create your own sled identity by choosing (based on model) a specific track type, a graphic “wrap” design, the new rMotion rear suspension as well as engine, windshield and add-on accessories. Basically, if you can think it up, you should be able to order it — early, of course! 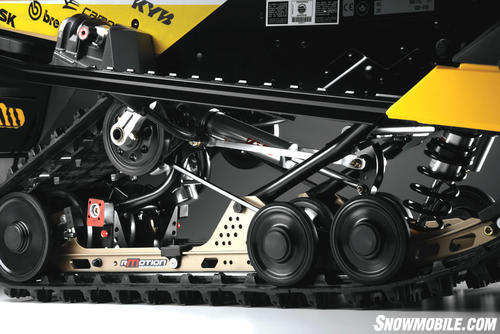 This all-new long travel sport rMotion suspension will be available on XR-S and X-package models — if you order early.

For the 2012 riding season, Ski-Doo builds on its evolutionary work of the past few seasons that saw the Quebec-based sled maker revise its basic platforms around the REV-XP design, expand its engine selections in both E-TEC two-strokes and 4-TEC four-strokes, and resurrect its Summit into a serious powder player for deep snow riders. You’ll find that MY2012 is more evolution — although the Freeride, which grew out of the powder and stretch track models, is now a model unto itself that appeals to adventurous off-trail explorers.

For trail riders, the big news, though only available on limited models, is the appearance of the rMotion rear suspension that is said to offer “…new levels in comfort, capability and adjustability.” The concept behind the new limited edition design centers around creating a suspension that filters annoying trail chatter and absorbs big bumps with its combination of separate rising rate ratios in springs and shocks. For the season ahead, you can order the rMotion with the “Quick Adjust System,” with its easily accessed and tuned controls on the sled’s runningboards, or the “base” model with its adjustments inside the suspension framework. The new design will be available on 2012 MXZ X-RS and MXZ X models only. It’s another reason to encourage early ordering.

As we noted, Ski-Doo spent a lot of effort last season introducing its latest two-stroke powerhouse, the E-TEC 800R, and its diminutive ACE 600 four-stroker. At the introductory model test rides last year, Ski-Doo technicians constantly whisked test sleds away as soon as an editorial group returned from a ride to fine-tune the power delivery and fuel mapping before putting the sleds back into the “test” fleet. They were busy, but you gained as it paid off in sleds that ran better as production models than as early season test sleds. 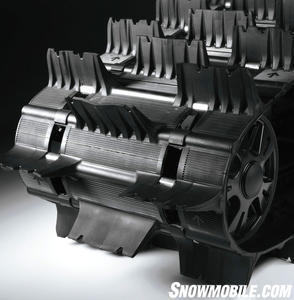 Track choice includes the 2.5-inch PowderMax when you order the Summit X early.

You’ll find that the E-TEC 800 powers more models in 2012. The GSX SE luxury trail sport cruiser will have both an E-TEC 800 and E-TEC 600 two-stroke option as well as the standard 4-TEC 1200 four-stroke triple. It will prove interesting to follow just how consumers choose to go — E-TEC or 4-TEC? The 800 two-stroke delivers 160-plus horsepower versus the milder, but larger displacement 4-TEC. And both are quiet, reliable and better than average on fuel.

Some riders will feel a change in the saddle as there is a new REV-XP Narrow and a rider-friendly REV-XP X seat that comes with 1.3-gallons of rear storage and about 3/4 inches of added foam for comfort. You can now carry extra gloves, water and a nylon facemask onboard without having to pop for a tunnel bag.

For deep snow riders, the PowderMax track will come with 2.5-inch lugs, the tallest currently available from the track maker. This will give powder hounds more aggressive traction for climbing.

All sleds equipped with KYB PRO 40 shocks offer tool-free adjustments, plus the adjusters are designed to work with gloved hands.

What you’ll have for Ski-Doo 2012 is an expanded and more rider-friendly line than last year. The key engines remain: two E-TECs in a choice of a 600cc or 800cc twin; two four-stroke choices, the 1200 triple or ACE 600 twin; and a smattering of sleds powered with the 550cc fan-cooled, the twin carbureted 600cc or PowerTEK 800 twins. 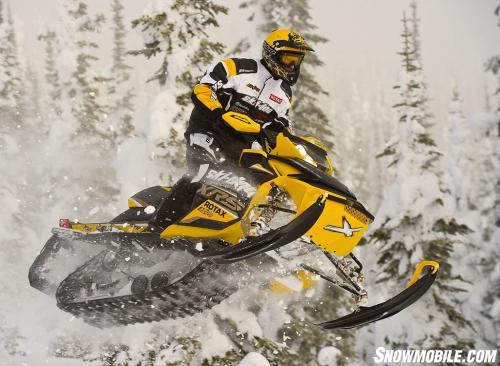 Rude air rocks the “RS” rider’s world as he’s on the gas and riding hard.

The big news here lies under the rider where the all-new rMotion rear suspension will do duty in the rough for those who order the X-RS or X packages. The X-RS is the racer-like big bump destroyer and comes with a commensurately stiff suspension. The chassis, shared with the snocross racer, has a forward-steering post. As you’ll note, this sled is evolved from last season, but not a breakthrough except for the rMotion suspension, large-adjuster KYB PRO 40 shocks and convenience of seat storage. If you order early you will get a choice of tracks — the RipSaw with 1.25-inch lugs or Ice Ripper XT track. The Ice Ripper comes with carbide studs embedded in the track lugs for added ice grip. Of course, you might be advised to remember whether where your ride has restrictions on “studs” or not before you sign the purchase order. The MXZ “X” package better suits the rider who wants a broader comfort window in his everyday sled. But he’ll find the less aggressive “X” will offer much the same features as the X-RS, including the rMotion rear suspension, a new seat with storage and track options for early order buyers. The X gives you the added option of the 4-TEC 1200 along with the two 600 and 800 E-TEC twins.

The value-equipped MXZ Sport offers the eDrive secondary on the ACE 600 and 550 fan, but you can also order a carbureted 600cc two-stroke. 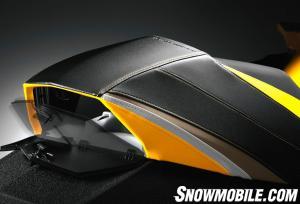 There’s enough room for spare gloves and a bottle of water in the new XP seat with rear storage.

This series expands availability of the E-TEC 800 in Adrenaline and Backcountry packages. The REV-XP seat with rear storage will be standard on select models and the Pilot DS (deep snow) ski will be fitted to the Backcountry.

The models continue with the Renegade “X” for serious riders. The Backcountry X will serve off-trail riders who also want the technology tweaks. The Adrenaline is the choice of everyday riders who like the bridging capabilities of the Renegade’s 137-inch track and the power choices of E-TEC or 4-TEC motors. The base Backcountry is designed for the rider who rides off-trail more than on groomed trails. The Sport is the value-leader with choice of ACE 600 four-stroke or 550cc fan-cooled two-stroke twin.

For 2012 the Freeride serves its own crowd as the truly serious ride for off-trail and out-of-bounds powder riders who want power, nimble handling and toss-ability in the tree line. This is the “extreme” rider special delivery package as it marries the best of the snocross racer with the best of off-trail and deep powder features. However, be advised that Freeride models are said to be early order only! If you want one, don’t dally.

This season the limited availability Freeride comes with one choice of juice, the 160-plus E-TEC 800 twin, but three sizes of mountain shoes — 154, 146 or 137. You will be able to choose your lug profile and a “wrap” graphic. The Freeride becomes its own “brand” as Ski-Doo expands this extreme design to include three different track lengths.

The base suspension is Ski-Doo’s SC-5M-2 on the 154 and 146, with a standard SC-5 skid on the 137. The KYB Pro 40 piggyback shocks feature tool-less adjustment. And there is the new seat with storage.

The XP-RS chassis is designed to rock the powder and the track and graphic options allow you to make your selection a personal expression of your snowmobiling “ride-style.”

Ski-Doo put a great deal of effort into the Summit series last season, so we expected a modest stream of evolutionary moves to make it better for 2012. The E-TEC 800 is available in both X and SP versions, but the X model is a “spring only” order and is available with a non-ported 2.5-inch PowderMax track. 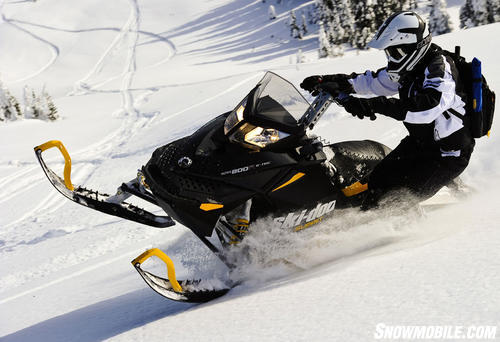 Designated the value-leader, the Summit Sport uses the twin carb Rotax motors — PowerTEK 800 or 600 with RAVE. 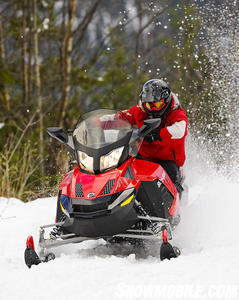 Sport cruisers now combine the appeal of a serious trail sport model with the amenities of a full-blown two-up grand touring mount. The top of the Ski-Doo ladder is the GSX SE, which is based on the REV-XR chassis, uses a 137-inch track to spin around its air-controlled suspension but now offers a choice of three engines — 1200 4-TEC or two E-TEC twins, 600 or 800.

Key SE upgrades for this season include a RipSaw track with 1.25-inch lug height, an updated tunnel bag with 24 percent more capacity and an upgraded Brembo hydraulic brake for greater braking capability.

The GSX LE with the E-TEC 600 is based on the lighter and narrower REV-XP chassis and adds straight aluminum handlebars with J-hooks for greater on-trail leverage. The REV-XR based LE uses the 1200cc four-stroke triple and also features a version of the 1.25-inch RipSaw track.

The top of the line Grand Touring models reflect very little change heading into 2012. The SE and LE are the top models and are based on the REV-XR platform, while the value Sport gets the REV-XP chassis. The 2012 Grand Touring Sport now features the SilenTrack on the ACE 600 powered model that is common to the SE with 1200 4-TEC and LE with its choice of 4-TEC or E-TEC 600 two-stroke.

The Sport offers the most engine choices as it also adds a 550cc fan-cooled powerplant or 600cc carbureted two-stroke.

Designed as a crossover between touring and utility, the Expedition SE and LE are based on the utility REV-XU chassis while the Sport version utilizes the REV-XP platform.

Only available as “spring order”, the Expedition SE adds Ski-Doo’s air control suspension and can be ordered wit either the 1200 four-stroke or 600 E-TEC two-stroke. Both the SE and LE come with a unique synchromesh two-speed forward transmission. The cost-leading Sport version offers a choice of power from among the Rotax ACE 600 or 550cc fan-cool twin, which now uses the eDrive secondary.

Look for the E-TEC 600cc-powered Tundra Xtreme to return with its main update being the addition of the REV-XP seat. The Tundra Sport will add the ACE 600 twin as power.

The Skandic comes in a wide track or super wide track designation, with the SWT moving over to the REV-XU utility sled chassis along with a new body format to accommodate the telescopic strut front end. The SWT will be available with either an ACE 600 four-stroke or the 600 E-TEC. The base WT will add the option of specifying the 550cc fan-cooled twin.

Regardless of your snowmobiling style — hot rod, powder hound, explorer, tradesman, tourer — one of Ski-Doo’s 140-plus combinations should suit you, be it in the MXZ, Renegade, Summit, GSX, Skandic or Tundra Xtreme.