Expansion is good, as history tells us. Lewis and Clark ignited dreams and the great American push to the West began.

Expansion for Ski-Doo is no different as the French-Canadian-based snowmobile pioneer makes more moves into the Western play areas.

The REV XM platform that makes the Ski-Doo Summit a success in the deep snow West moves to the Freeride. The XM chassis with its feathery feel through the handlebars is a smart platform where balance is, shall we say, “well-balanced.”

The Freeride hums along on Ski-Doo’s REV XM RS chassis. It is different than the XM Summit X and SP in that it is reinforced in key areas where hillclimb competitions and hardcore backcountry freeriders challenge chassis integrity. There are three Freeride variants: 137, 146 and 154. The long boys, the 146 and 154 are identical in that these use the XM-specific tMotion rear suspension with the FlexEdge track. The 137 uses rMotion without FlexEdge tech. Track lug height for the 146 and 154 is 2.5 inches, the 137 rips along on a 2.25-inch track; all are 16-inches wide, a proven Ski-Doo tradition.

The 2014 Ski-Doo Freeride comes in three chassis lengths: 137, 146 and 154. The 137 is rMotion and PowderMax track equipped, whereas the 146 and 154 are tMotion equipped with PowderMax 2 FlexEdge track technology.

To understand the Freeride is to understand that BRP (Bombardier Recreational Products), the parent company for Ski-Doo, is committed to building snowmobiles that fit every mountain backcountry free riding niche. Furthermore, Ski-Doo wants the freeride mountain rider to have in his hands an easy-to-maneuver hill masher, jump master and competitive hillclimber. 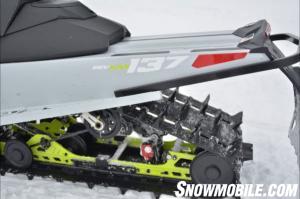 The 137 Freeride uses Ski-Doo’s rMotion rear suspension with PowderMax track that sports lugs that are 2.25-inches tall. Track width is 16-inches. KYB 40R shocks are used throughout the rear skid.

Supplying motion to the Freeride is Ski-Doo’s proven E-Tec 800 twin cylinder two-stroke Rotax motor, which Ski-Doo reports has a horsepower rating of 163.9. The E-Tec powerplant is not a motor that when idling or at wide-open throttle (WOT) roars out its King Kong strong strength. Just know it is King Kong strong with quiet tones. This E-Tec is the strong silent type. 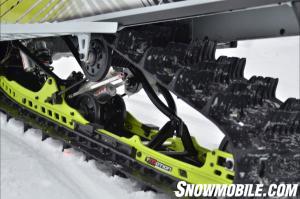 The 146 and 154 Freerides are equipped with tMotion and FlexEdge PowderMax 2 track that stomps the powder with 2.5-inch lugs.

From nose to tail, the Freeride’s front ski stance is adjustable from 38.4 inches to 40.1 inches and features a quick disconnect sway bar to uncouple the front suspension. The front suspension soaks up the yackity-yacks with KYB 40R Easy Adjust shocks. What does this mean for the powder rider and drop junkie? For starters, you can adjust the Freeride for flat uphill carves on a speed course, or you can narrow up the front end and uncouple it for that feeride run through the trees.

Ski-Doo has a nice powder-compliant ski; the Pilot DS 2 ski that gives good control. There are times though we found the longer tracked 154 bullied the ski through the powder.

Tucked under the tunnel for the 146 and 154 is Ski-Doo’s tMotion with FlexEdge Powder Max 2 track – the same technology seen in the Summit X and SP. Like the front suspension, the tMotion manages bump whacks and jump slaps with KYB 40R Easy Adjust shocks on the rails’ front and rear. Bringing the sled to a halt is the command of Brembo’s racing-quality brake. 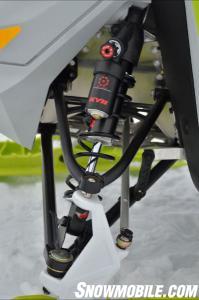 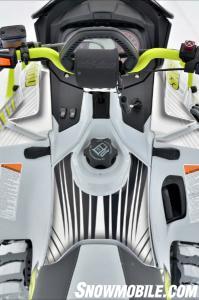 Minimalist controls, to include a protective RER cup and curved handlebars with mountain strap, give the Freeride rider control and balance from the XM chassis. Note the goggle warmer behind the instrument cluster.

To keep the chassis tight after a day’s worth of abuse, BRP reinforced the XM RS chassis where the tunnel and bulkhead meet. Yes, this does add some weight, but the Freeride with its nimble XM chassis does not slow with the minimal pound increase. I believe the reinforcements are needed, for if the Freeride should bend, break or bust, then personal Facebook accounts, snowmobile forums and Twitter feeds will ignite with gritches and groans of “too light.” Ski-Doo does not want the social networking nightmare.

The Freeride comes in a color scheme that is either a love-it or hate-it: dove gray with soft lime green accents highlighted with white and black. The “Spring Buy” option allows the purchaser to choose a wrap, free-of-charge, that matches the color scheme just mentioned. I’m OK with it and will gladly ride a Freeride. 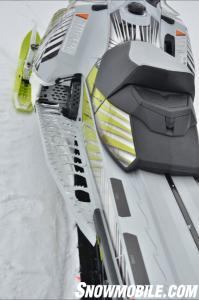 Just-right sized footboards, with aggressive traction and wide snow evacuation holes, help the rider stay in control and not in the ice. The painted tunnel helps prevent flash freeze, that is snow accumulating on the tunnel.

Buy it and ride it if you want to drop and jump like Ski-Doo’s extreme rider Karl Kuster. Buy and race it if you desire to rip the gates on a Rocky Mountain Snowmobile Hillclimb Association (RMSHA) course like Mark Thompson. However (there’s always a “however”), if you are a tight tree picking, ravine popping and sidehilling mongrel dog, then you may want to consider the Summit X with its 35.7- to 37.4-inch ski stance; the two-inch difference is huge.

Yet for me, as I did during four days of evaluation, I unhooked the Freeride’s quick-disconnect front sway bar to give the Freeride the ability to roll into a sidehill and too, to perform with ease wrong foot forward downhill sidehills with its accompanying back-up-the-hill U-turns.

If I was swerving around RMSHA gates in a competition, the swaybar would remain intact, but for powder use when the terrain is steep and tree infested, then I would disconnect and play. This is not a nit-pick on the Freeride, but taking advantage of Ski-Doo’s engineering, which by design, was given to the Freeride owner to have the option to ride with or without the swaybar. The quick-disconnect is part of the Freeride’s persona and we like having choices and a snowmobile that delivers.

The 146, stuck in the middle between the shorty 137 and longer 154 ,is no slouch when it comes to busting some powder. Yes, it has a 146-inch track, but with its 16-inch width there’s a footprint that computes to 2336 square inches. Compare this to, for example, the 155 RMK Pro with its 15-inch wide track that lays down 2325 square inches. Which one has the larger, albeit more flotation footprint? The 146 Freeride. This means agility favors the Freeride in thick and narrowly spaced tree slopes. 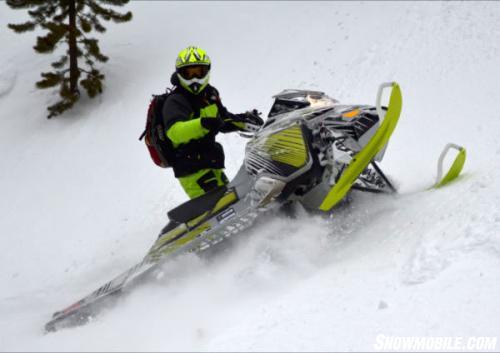 Ski-Doo extreme rider Karl Kuster lays down a wicked cut on a 30-degree plus slope. The Freeride conquered the mountain with ease.

Why You Want a Freeride 137

Midwestern and Eastern trail switchers will enjoy the 137’s rMotion suspension for bump soak. To that, the 137 travels over the choppy moguls with ease as the rMotion stretches across the mini valleys. The 2.25-inch tall paddles on the Powder Max track give the shorty Freeride some nice mildly deep-powder capabilities. But, don’t expect to chase the 146 or 154 Freeride; you’ll be left digging yourself out from some deep trenches. We learned this the hard way on the northwest side of Two Top, near Island Park, Idaho. Yet, the 137 Freeride will take backcountry strolls and hits if the powder is not wickedly deep, but settled. 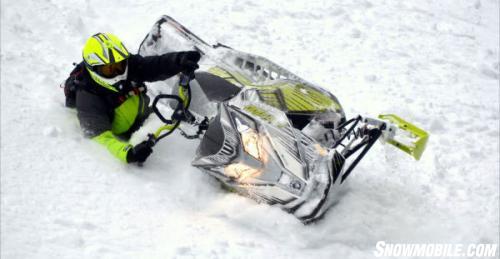 Sliding down off the 30-degree slope, Kuster lays the Freeride on its side to begin a U-turn and an ascent.

The 137 tracks flat and sure-footed on the trail. Its ski stance and the Pilot DS 2 skis keep the 137 tucked underneath the rider, giving the pilot confidence to burn right and left. The 137 is, I believe, a hybrid crossover – it has a 16-inch wide powder track with two-inch paddles, powder-compliant skis, mountain handlebars and center pull strap, minimalist cockpit controls, a light mountain chassis, but a rear skid (rMotion) designed for bump bashing, of which the rider has easy control over its transfer and absorption response. Nice. I’m not taking anything away from the Renegade Backcountry X, but if you are in the buying mood, place them side-by-side to each other and search your soul. Folks, both are winners. For me, I like the Freeride’s mountain amenities: taller handlebars, center strap, quick-disconnect swaybar and 16 inches of track width with two-inch paddles.

The Freeride 154 competes against Polaris’ RMK Assault and Arctic Cat’s HCR, which both are stamped out for backcountry freestyle or competition use. The 154 Freeride, unlike the Assault and HCR, uses a softer albeit more powder-compliant track, the PowderMax 2, that makes it more acclimated for light and fluffy deep powder use. The RMK Assault’s competition block track tears at the powder rather than packing it. The HCR’s Power Claw track is almost the same configuration as the M8000 Sno Pro variants, but its lug is stiffer, which keeps it from folding when encountering rock gardens. In essence, the Freeride is more deep-powder friendly than the RMK Assault and HCR, sharing the same track as its siblings, the XM Summit X and SP. I find the Freeride’s track appealing. 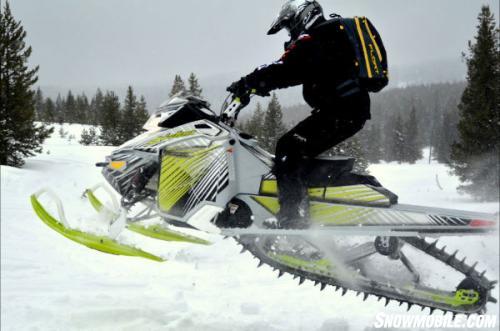 Hucking out some air, test rider Kevin Allred does an “Air Jordan.”

Ski-Doo added some nice mountain-rider standard amenities that make the three Freerides what they are. Excellent running boards that are narrow and keep the XM chassis from hanging up (lifting or pushing out the track) when mashing a sidehill. The boards evacuate snow nicely, are rigid, and are just wide enough to keep a boot happy. The Freeride’s seat is rounded and not too tall when transitioning from right to left; it has some storage, but could use more. Minimalist controls – heater and lights – keep the weight down. The goggle warmer behind the instrument pod is a welcome must for powder riding. Curved handlebars with a semi-rigid mountain strap round out some perfect ergos. Also, the painted tunnel reduces snow flash-freeze, thus keeping weight down.

To choose a Freeride 146 or 154 over a Summit X of same track length is a matter of deciding if a wider ski stance, piggyback KYB shocks, and chassis reinforcements are best for your riding needs. I don’t know how to advise you here, as both utilize the well-balanced “Jack-be-nimble, Jack-be-quick,” XM chassis. I’ve witnessed Karl Kuster slap silly some 30-degree steep and steeper slopes on a Freeride 154 with ease, which tells me the Freeride just does that – it free rides the mountains.

Ski-Doo gives choices with its Summit X and Freeride line on the XM chassis with excellent E-Tec 800 power. Truthfully, I would be happy on both. Basically, it comes down to what crayon you want to use to color outside the lines.
Remember too, the Freeride model line has the quick trail burner, the 137, which makes for superb trail and powder riding.