tMotion represents a new way of looking at powder riding

Synergy is a business term where the sum is greater than the computation, for example, 2+2=5, a sum greater than 4.

Thinking outside the box is another business term where conventional wisdom is challenged to create new concepts – competitive concepts. Two companies come to mind, Apple and Lockheed Martin and its famous Skunk Works.

When Snowmobile.com first learned of Ski-Doo’s tMotion rear suspension, an eyebrow lifted and thoughts surfaced that this is one of two things: brilliance or gimmick. Which would it be? And how did it fit into the Ski-Doo Summit and its storied history. 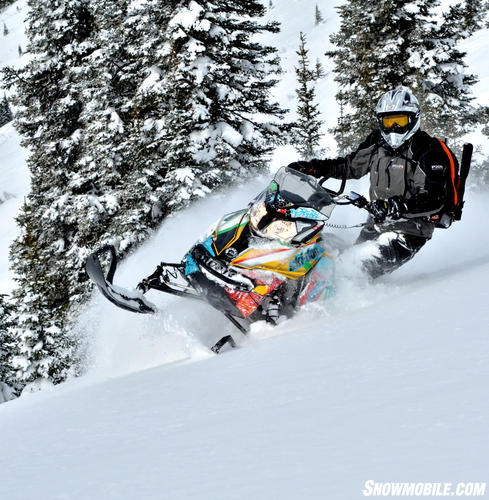 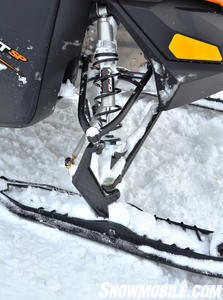 Beginning at the Summit’s front, tMotion, we declare, starts with the 7mm pushed forward spindle and 10mm deeper keel ski.

Just what is tMotion? Ski-Doo’s parent company, Bombardier Recreation Products (BRP), states it is the Summit’s rear suspension. True. But, we feel it is a system within Ski-Doo’s new XM chassis. That system is made up of the tMotion rear suspension, new FlexEdge track (which is part of tMotion), pushed forward handlebars and skis, side panels and footwells that are deeper to align the rider with the handlebars and track drivers. We believe tMotion is a greater sum of two components – the rear suspension and track – where all new XM components amplify the other.

The tMotion is, specifically, a rear suspension where a ball joint hinge, residing between the rear arm, the drop link, and split flex points on the front arm, swings two-degrees right or left, for a total of four degrees, to induce a controlled roll with more track footprint on the snow, for a more a approachable side track angle on the snow – when sidehilling across a steep slope.

Secondly, the tMotion works in tandem with Ski-Doo’s new Powder Max II track. The 16-inch wide track with 2.5-inch tall lugs has flexible edges. Molded into the track, from the center out at a length of 12-inches, are fiberglass reinforcing rods; and with the center 12-inches reinforced, the track’s outer two-inches are not reinforced and flex ever so slightly up (to match the hill’s slope angle).This allows the track’s edges to flex up when a sidehill roll is initiated.

This is tMotion. Rear suspension rolls right or left on its pivot point – a ball joint – two degrees, and the track’s outer edges flex up. This, in theory, keeps more track surface on the snow when initiating sidehill maneuvers. After spending some time riding it, we call it fact. 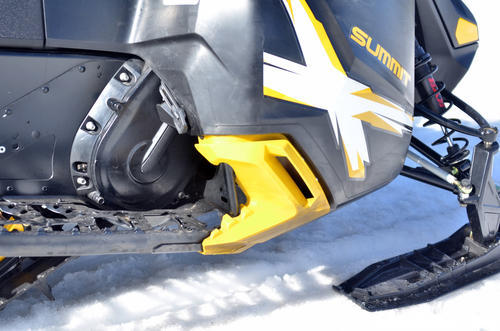 The open footwell, is part of the whole Summit tMotion package. This seemingly insignificant change is highly significant in aligning the driver with the handlebars and track drivers.

We discussed tMotion with Steve Cowing, media relations and PR manager, Ski-Doo, and here are his replies.

Snowmobile.com: What drove these concepts? Cowing: Creative thinking  — people talk about “thinking out of the box” — the designers and engineers looked at the issue, in this case how to make a snowmobile bank easier into a mountain turn, and put those ideas into practice without the confines of ways it was currently being done. Snowmobile.com: How long in the making? Cowing: A while (can’t say as it gives insight into our processes) Snowmobile.com: What was / is the ultimate goal for tMotion, and the new Powder Max II flex track? Cowing: To make mountain riding easier for everyone, advanced to novice. We talk about making our customer’s experience better each and every day – this is walking the talk. The tMotion rear suspension and FlexEdge track is the “tMotion,” but as we believe, tMotion is interconnected in function with the front suspension and chassis changes.

As we have noted, tMotion is a sum of all parts, many parts. The S-36 package, introduced on the 2010 Summit, remains with the XM Summit, but is changed to accommodate the tMotion rear suspension and track. The changes include skis that are pushed forward 7mm from the spindle and a 10-millimeter deeper keeled ski from 2012 that too has a flatter tail. The changes to the ski allow the sled to bite into the hill better than its predecessor MY2012 ski, and too, according to Ski-Doo’s Summit engineers, prevents the ski from pulling the snowmobile down off a mountain when in a sidehill run. This S-36 change benefits from tMotion. Or is it the other way around?

Revising the side panels pays off. Ski-Doo opened up the lower side panels by the footwells to allow the diver to stand eight inches farther forward to allow the body – again capitalizing on body mechanics – to be in line with the handlebars and the track drivers. To us, this too makes tMotion what it is. Without this, could tMotion work as it does? We don’t think so. The opened up side panels (eight-inches of useable real estate) and body alignment to the handlebars and drivers corrects the out-of-body positioning the XP Summit was known for, and which the S-36 handling package tried to correct – which was close to doing – but was still somewhat short. 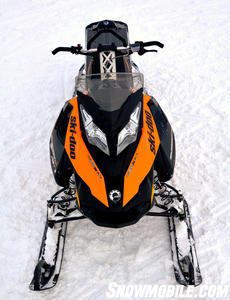 Here the tMotion system is exposed from nose to tail. Also note the open platforms on the runningboards. A system that functions well, like a well-running sports team, is made up of many complimentary parts.

The S-36 front suspension on the XM Summit maintains a narrow ski-stance from the XP Summit days, 37.4 inches to 35.7 inches.

A minor part to the tMotion system is the painted tunnel and wide-ported running board platforms. Ski-Doo’s black painted tunnel, and the motor’s cooling system, reduces snow from flash freezing to tunnel. The runningboard’s evacuation holes also keep snow from accumulating on the chassis.  These two niceties help keep the XM Summit from becoming unbalanced. In our opinion, it’s all part of tMotion.

The tMotion system, rather the whole XM system, gives the 2013 Summit X and SP a light and aggressive feel. Though the Summit is heavier than the RMK Pro from Polaris, and near in weight to Arctic Cat’s M8 Sno Pro, we feel it is the lightest handling mountain snowmobile for 2013. Beyond the light feeling, the tMotion system allows the XM Summit to lift its nose and plane flat when in deep powder; it does not trench like the XP Summits of our near history. Also, in straight runs up a steep ascent, the Summit with its S-36 package maintains a flat approach, meaning it does not tail walk.

The tMotion system has virtually eliminated the XP Summit handlebar slap when sidehilling across hardpacked or trenched up snow; the Summit does not want to dive for the hill’s bottom by forcing itself to run with both skis on the ground.

We recommend you read our rider’s opinion on the XM Summit as a whole. This technical article, hopefully, gives you greater insight into the tMotion system. However, to fully appreciate what it delivers, spend some time on the snow hooked to an XM Summit.