If you have snow and are riding in your area, enjoy it. As we write this it is heading to a record 40-degrees. On the first day of February. Incredible. Drat (this is a family site, you know!).

In my earlier snowmo-writer life when I followed the big buck snowmobile racing professionals across North America on that first Sno Pro circuit and the full-blown factory-backed cross country teams for a snowmobile weekly tabloid, you could count on the third of week of January demanding that you dressed in serious winter gear. No t-shirts. No shorts. Wind chill was serious as the normal temperature could easily be tens of degrees below zero. It was cuddling weather. Once we got past that third week of January we could count on two things, literally weathering the coldest of days and enjoying more minutes of sunlight. 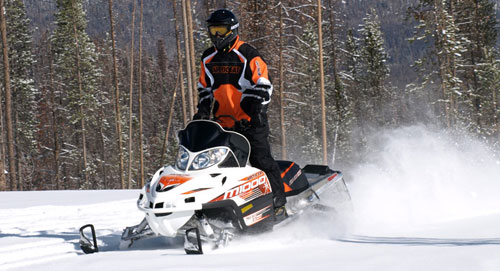 Market segments have always evolved based on consumer demand and where there’s readily available riding. Right now that is in the West with its deep snow cover.

For us in what was once the heartland of snowmobiling’s market, winter has been a pussycat. We have four fully fueled sleds ready and waiting for good snow. Who are we kidding, at this point, it’s any snow. Recently we called a friend with whom we normally ride and who is responsible for groomer maintenance on our favorite trails. He told us two things. First, he had taken his groomer out. That should be a good thing, right? But he got about a mile down the trail and turned around as the groomer was doing more harm than good since there was so little snow. Second, he told us he had ridden about 75-miles around the inner edges of one of the region’s largest lakes. That should be good, right? He reported fair snow on the north edge and slightly better windblown snow on the southern rim. The eastern and western sides were killers with huge heaves, cracks, open water and glare ice. His exact words, “You wouldn’t like it.” He knows me too well. But, now I’m thinking about it if nothing else comes our way soon. Better something than nothing. 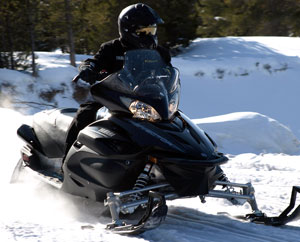 One thing we’ve noticed is that despite the grumbling about a lack of low-buck starter sleds, consumers want more rather than less and will pay for it.

Like many of the region’s snowmobilers, we share a demand, a will to ride. The places that have some promise are so heavily trafficked that what little snow has been available gets pounded into oblivion and shunted to the sides, leaving bare and treacherous corners to catch the unwary. It’s amazing how one season can be so different than another. Last year we had many feet of snow and the riding was sensational — everywhere! We got spoiled and many of us were encouraged to buy new sleds.

Early sled sales were on a screaming pace. Arctic Cat impressed the heck out of its fans, drawing in owners looking to replace older Cats for the 2012 models. One competitive sales executive noted that when Arctic Cat brought out this line of new sleds that old Arctic Cat enthusiasts came out of the woodwork. If you look at Arctic Cat’s end of 2011 corporate results, you’ll see that he was right on the money — Cat’s money, not his company’s money! 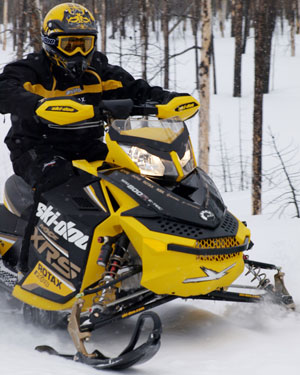 A strong seller, Ski-Doo and its XRS play in a shrinking segment as the longer track crossovers grow in popularity.

As you would expect, Arctic Cat’s chief executive officer Claude Jordan was excited, stating: “We are very pleased with the company’s strong third-quarter and year-to-date performance. Our results were fueled by higher sales across all product lines, including double-digit gains in our snowmobile business. The combination of increased volume, product mix, product cost-reduction efforts, higher selling prices and a continued focus on efficiency led to another quarter of significantly improved gross margins and profitability.”

Jordan added, “We remain confident that the company is on track to deliver improved operating results, increased profitability…”

But, and it may be a very big “but,” sled sales have effectively stopped in areas where there is little to no snow for snowmobiling! This is not an Arctic Cat problem, but an industry-wide one as winter 2011/2012 has pooped out versus last season. Our western riders complained to us that what snow they had early on was not enough. Still, early sales before the predicted snow season revealed some interesting tidbits. The deep powder segment was the leading sales segment in the sport. Not only were the 800cc sleds selling well, but those new 600cc powder sleds were finding homes almost as fast the dealers could get them in stock or fill in an order blank. 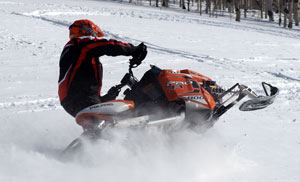 Also, as we suspected based on trends for the past couple of seasons, the so-called crossover market rapidly gained market acceptance, trailing powder sled sales by a little bit. This is not surprising when you look at the emphasis that the sled makers have been putting on that segment.

But, something had to give and it would appear to be sales of the standard trail segment. The crossovers with their longer tracks provide greater versatility for riders and with the power of the new breed of 800cc engines, performance is stellar. Maybe you give up a little bit in quick, nimble handling, but you gain more comfort over marginally groomed trails, get the latest technology and an ability to get off trail any time you want. 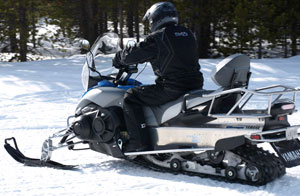 Sled makers still build two-up models for touring, but their focus is more on adding a spare, occasional seat space on their stretch track models.

When Polaris extended its Switchback to the elongated ProRide suspension, you had to be a darn fool not to see where this segment was headed. Arctic Cat built a complete intermediate series based on its new ProCross/ProClimb models to appeal to buyers. And, didn’t Yamaha recently disclose the addition of a new 1.75-inch lug profile track option for its Nytro XTX? While some may say that there is a new segment developing, we’ll modify that to say that the role and definition of the trail sled is changing from 120-inch tracks to sleds with tracks of 136-inches and up. Within that definition we’re seeing two emerging subgroups. The groomed tail rider and the not-so-deep powder group. The latter works great for the flatland snowmobiler who wants to go places out West for a week or break trail in traditional heavy snow areas such as Michigan’s Upper Peninsula or other lake effect snowmobiling areas.

Ah, yes, the industry has been on a product roll of late as seen in the wide diversity of 2012 models. Sled sales up through the final quarter of 2011 looked fabulous. And, then it came to a virtual halt. That’s the bad news. 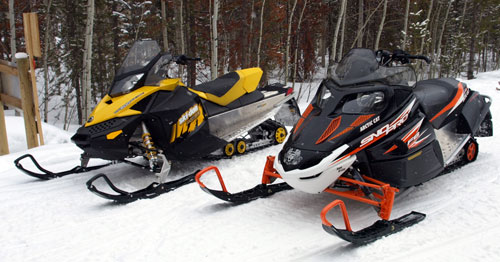 Is the used sled the new entry-level model? It appears to be so and many dealers can make better profits per unit on used than new.

The good news is that the enthusiasm for snowmobiling is still there. This time around the snowmobile-marketing gurus know that despite the awful economic times we’re all working through, snowmobilers need to get out and ride. Look at the season’s early sales results. We are demanding new sleds. Well, we were. Right now, we may wait to re-invoke our enthusiasm when we see what is coming for 2013. But the sled makers seem to be quite positive despite this uncooperative winter. Once again, they can see proof positive that despite all their great marketing programs, gimmicks and plans, there is only one sales tool that encourages sled sales. Snow!