Final thoughts on the RMK Dragon 800 and M8

These snowmobiles were comparable in many ways, but snow conditions and rider skill determined which of the two out-performed the other. But in the end, the lighter, more reliable and slightly more powerful M8 snuck out ahead in the fave category. But not by much, as the IQ Dragon RMK 800 was ridden hard, given no time to rest, and was tested, and tested and tested. We are devoted IQ-chassis fans. For 2011, the Pro Ride RMK may change it. This new ride from Polaris will, and has, changed the landscape in the lightweight 800cc mountain snowmobile class.

We put these two sleds through a grind this winter. In fact, each was returned to their respective dealers with close to 800 miles on the odometer. 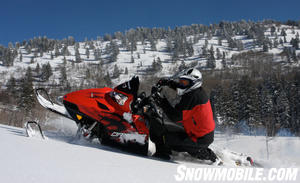 The Polaris Dragon 800 is the flagship of the Mountain segment. It comes stock with Pro-taper bars, and Walker Evans shocks. It has ice scratchers instead of boogie wheels to cut down on weight.

This was the first time in many years Team Allred had a Polaris RMK 800 in Team hands. The 163, in its last year as an IQ RMK, was fun and confident. Though it was heavier than our M8, it never felt heavier. Its high mounted motor and excellent front-to-rear near-equal weight distribution made the Dragon feathery light through the handlebars. The Pro-Taper handlebars and perfect-height handlebar stem made the Dragon simple to handle, flick and sidehill. It shined when diving into a downhill sidehill, in a wrong foot forward stance —  kick, lay it down, turn and up the hill it would go. Sweet.

We did experience some frustrating moments with our 2010 Dragon. First, the motor coughed out some error codes and lean spots in its mid-range powerband; and second, its oil consumption was unusually high. When the error codes flashed up, and the oil became gall-darned expensive to keep purchasing, Team Allred returned the Dragon to Rexburg Motor Sports (RMS) for an evaluation. The service techs reflashed the Clean Fire Injection (CFI) system with Polaris’ latest ECU map, and adjusted the oil pump to OEM specs, as the adjustment cable was stretched out of spec. The techy visit cured the problem for the electronic fuel injection system for remaining rides; but after one mountain stomp, the Dragon’s high oil consumption returned. We returned our Dragon to RMS where they found the oil pump was out-of-service; RMS swapped out the old pump with a new one, and oil consumption returned to normal.

Near season’s end, the hyfax wore beyond use. The Snowmobile.com Mountain Team is not convinced that ice-scratchers for fewer idler wheels on the long rear skid (for weight reduction) is what mountain riders want. We were frustrated with the high-temp light flashing at us, and burnt hyfax. Conversely, our RMK 700 never screamed hot temps, and its hyfax stayed true throughout the season. So, we prefer extra wheels, the miniscule weight gain is better than toasting a motor, or more of surety, melting the rear skid’s hyfax. 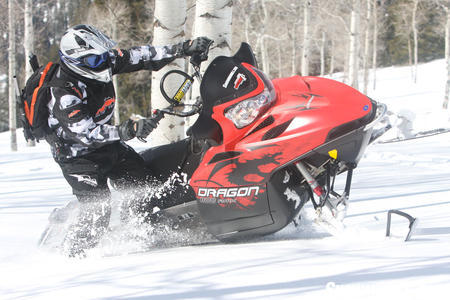 The Dragon is an expert grade mountain sled, along with that comes some extra maintenance. Consumers should be aware that the ice scratchers can be a hassle and can premature wear on hyfax can occur if not used properly.

The IQ chassis RMK, with its Walker Evan’s shocks was predictable on the trails and was obedient when sticking a ski into a hillside and in tearing trees off a mountain. It is a quick boondocker.

After 2010, the 800 IQ Dragon is history, giving way to the Pro Ride RMK 800 (RMK, Pro RMK and RMK Assault). This is a good move, as the Pro Ride RMK is light, agile and needed for Polaris to compete against the light M8 and Summit. However, the IQ Dragon RMK is not an outdated chassis. The product works, and we enjoyed it.

As mentioned in our mid season report, the Dragon is an easy Mountain sled to ride, it is predictable, is effortless to sidehill, and to maneuver in technical situations. The Dragon’s Walker Evans shocks benefit the rider, no matter what the terrain and the 800 CFI motor delivers strong usable power. It is a motor that starts easy and runs great, especially after it received Polaris’ latest electronic control unit (ECU) program at mid-season. I found the gauges on both of our Polaris sleds, which include engine coolant temperature, useful for warm up, and when lumbering on icy hard pack trail situations. The Pro Taper handle bars fit perfectly in my hands.

The Dragon came with ice scratchers, since all idler wheels were removed from the skid frame, this to aid in weight reduction. Team Allred found it essential to use the scratchers is most cases, except in deep snow conditions, if not the coolant temperature would rise, and hyfax wear was high. In the West, we had a low snow year, thus engine cooling and hyfax wear became a problem.

We had to change out our failed oil pump, which poured much oil into the motor, and after this swap out, we experienced no other problems with our Dragon; oil consumption returned to normal. Also, clutch calibration was perfect for the 800 twin, and we experienced no drive belt issues, Lastly, the Dragon’s flat red color looked good on the hills. 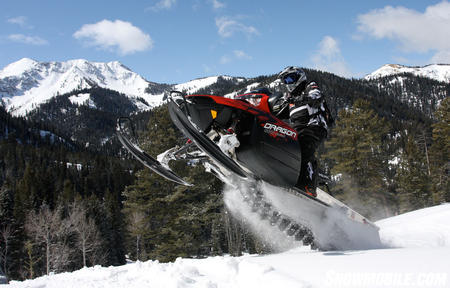 The Dragon was consistently one of the go-to snowmobiles for great backcountry riding.

Our Dragon and RMK had similar characteristics. However, compared to our 700 RMK, the Dragon’s lighter weight was noticeable on every ride.  The Dragon had good solid power, was easy to tip to one ski, and in my opinion, was equipped with the best shocks of any sled; I love the Walker Evans shocks. 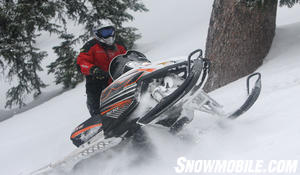 The M8 shows off it highest in class horsepower. With that horsepower it is light and nimble in the steep and deep.

We rode our Arctic Cat M8 with confidence throughout the season, knowing the motor, clutches and suspension would hold strong and reliable, as in years previous.

Arctic Cat may not have the best fit and finish, but its product line is robust. After numerous years riding Cat’s M8, we have never, ever, called a dealer to have repairs made, this why we dub our 2010 M8, “Mr. Reliable.”

For 2010, the new 800 H.O. motor delivered all the oomph Cat advertised it would when the Thief River Falls company introduced the motor for the 2010 chassis.

The higher output motor was a blessing over the previous year’s motors where the M8, though strong in finesse and balance, lacked power. Its saving grace was its direct drive system which allowed more horsepower to hit the drivers than the other OEM’s 800s (which made the powder wars an even war).

In our powder sled evaluation, the M8 and Dragon split the Team’s two uphill course speed runs, the hill cross going to the M8 the straight line uphill timed speed runs went to the Dragon, the difference in average time was about four-tenths of a second. On any given day, this would switch.

The M8’s most salient feature, besides its boondocking ease, is its Power Claw track, which was the most consistent track for this year’s snow.

The M8 had one contentious point among Team Allred, and that is its seat height. I am a staunch advocate to the M8’s seat height, Kevin has no opinion, and Jake is hard over that it is too tall, “I can’t swing my leg over it as easy I can the Dragon,” he often retorts. If that is all the M8 can pull for a nit, then the sled is well-built and well-designed. 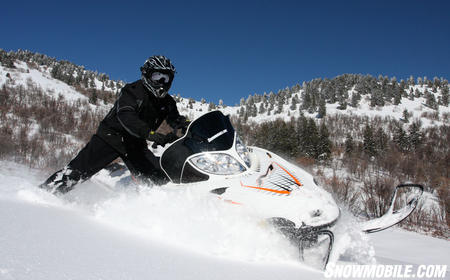 The 2010 M8 has come along ways in 5 years from the original 2005 M7. It is probably the most user friendly mountain chassis on the market.

For 2011, the M8 remains almost as the 2010, with most fine-tuning occurring to the Fox Float air shocks.

At photo shoot, March 2010, Cat reported to snowmobile media outlets, that for season-2010, the M8 was the company’s best-selling snowmobile, and was the most purchased mountain sled, leading the other OEMs (Cat owned about 60% market share for 2010 mountain sled sales). This is remarkable knowing this was done on a five year-old chassis. We attribute much of this success to the M8’s agility, power and durability; the M8 was the most forgiving and easily-controlled mountain sled for 2010. Lastly, due to its strong sales, motor muscle and chassis balance, we declare the M8 as the most reliable mountain snowmobile for season 2010.

If you have followed any of our articles about the M8 over the years, you have probably picked up on that the M8 has been a favorite with Team Allred. But with what we learned this March in West Yellowstone at the Annual Snow Shoot was the M8 was a favorite with the western rider as well; it was the biggest selling model for Arctic Cat and the number one selling mountain sled in the West. The M8 been around since 2007, so why the big leap in 2010 sales? The high output or HO 800 motor. This motor is what we always wanted and finally received for 2010. It pulls hard and never flattens through its power curve. Its fuel mapping and clutch calibrations were spot on. Combine this with an excellent chassis, and I feel complete confidence on the M8. It will take me into nasty and technical riding situations and get me out. As we put the M8 through the ringer for the season, we experienced no problems. 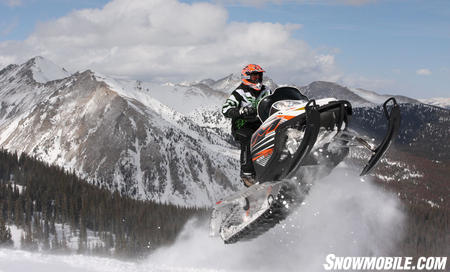 Even with a 163 in track the M8 can get plenty of air. The Arctic Cat M8 encourages a rider to gain more confidence in their abilities.

The M chassis came out in 2005, and has constantly been refined and perfected. The 2010 M8 is probably twice the sled that the 2005 M7 was. That is how much Cat has improved this chassis. After years and after many rides in all conditions and types of terrain, I can confidently say the 2010 M8 is the best stock mountain sled ever made.

The M8 has the most user-friendly chassis I have ridden. There is no learning curve. I am amazed how many times people, who have no brand loyalty, after a day of riding say they like the M8 over other brands and models. The M8 is light, easy to start, has a light throttle pull, and power to satisfy. We had no problems with any component of the M chassis; it was bullet proof from bumper to bumper.