We love an insanely fast fighter jet. We all crave power for vertical climbs into the stratosphere. Being a typical Middle Class dude living in Southeast Idaho, I can’t afford an F-22 Raptor. I suppose, you can’t either. Yet, Arctic Cat has helped us earthlings be a pilot for a day and more. Throttle up an M1100 Sno Pro turbo from Arctic Cat and feel F-22-like G-forces for the snow. 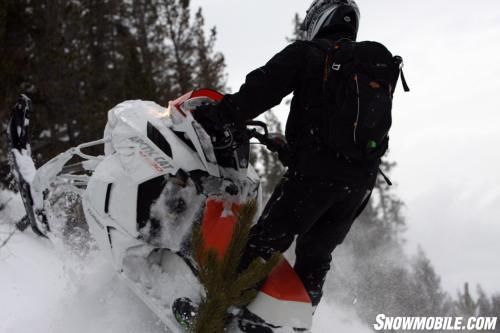 The first mountain sled with a factory turbo, the M1100 Turbo is sure to turn some heads this winter.

But, what about this turbocharged Suzuki four-stroke twin in the ProClimb chassis? Let me answer this with an analogy. We know that four quarts of water can’t be crammed into a two-quart pitcher. Cat, looking to save money by building a common chassis – as the other OEMs have done for several years now – was able to, with turbocharging, cram four quarts into two quarts. That’s what it’s all about. Coming up with a common chassis that houses a large turbocharged four-stroke with all its wiring and plumbing is beyond mechanical engineering 101.

Since its inception, Arctic Cat, with its big twin four-stroke turbo, has dominated grass and asphalt drags with its Sno Pro 1100; fastest production sled (in stock form) in the World, as Cat and others declare, with the evidence to support this. With this success, Cat looked to show its three competitors that a full factory-built turbocharged monster sled is right for the public. The additional weight of the four-stroke 1100 is initially noticed compared to the 800 two-stroke, but when the turbo spools up it instantly feel lighter.

Four-stroke mountain snowmobiles are not new to the mountain rider. Yamaha has been building such for years, beginning with the RX-1 Mountain, then Apex MTX and now the Nytro MTX. Yet, none of these come assembled from the factory with a turbocharger. (Though Yamaha is offering a turbocharger or a supercharger as an accessory for its 2012 Nytro MTX 163, which must be dealer installed.)

Here in a snapshot is the M1100 Sno Pro 162 and its twin, the HCR, which is also is turbocharged and is similar to the M1100 turbo Sno Pro except for some titanium parts and wider ski width.

The turbocharged M1100 Sno Pro, Limited, HCR, 50th, and all non-turbo models come in one track length only – 162. There is no 153-ish, though I deeply wish there was, especially for the HCR. That simplifies the buying decision. But, you must decide between housecat meows or mountain lion roar. But, this isn’t a big surprise, as the M1000’s last two years was as a 162 Sno Pro. (I’m still in therapy knowing my champion M1000 received its pink slip.)

Stuffed into the ProClimb chassis is the Arctic Cat and Suzuki designed two-cylinder four-stroke that squares out with a bore and stroke of 98 x 70 mm. Its displacement is 1056cc. A single – just one – 46mm throttle body feeds the big twin. The liquid cooled motor is lubricated through a dry sump. The actual turbo unit is mated to a stainless steel exhaust.

All the turbo boys share the same drive and brake systems, a six-post (rpm sensing) drive clutch, a 10.75-inch diameter roller cam driven, and a radial master cylinder hydraulic brake with the disc on the crossover drive shaft. 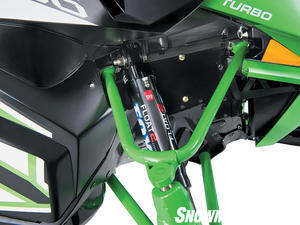 Did you pick up on the perks? If not, then in repeat, ice scratchers, clock, accessory outlet and a heated seat (sorry HCR riders, no added weight for your racer). Now, being us baby boomers have come to cherish our heated handlebars, having a big four-stroke turning a big generator which throws a lot of wattage, a heated bun warmer is, well, far out.

The ProClimb engineers, sticking with the mission of common chassis, had to work hard to build a chassis that would accommodate a twin-cylinder two-stroke, as well as the hefty two-cylinder four-stroke. Given that, the M1100 remains narrow. However, it has a Yamaha Apex feel to it, if I could draw somewhat of a familiar comparison. The M1100 does not have the horizontal steering post like the M8 Sno Pro; the motor and its plumbing maxed out the room. Also, unlike the M8 Sno Pro, the M1100 does not have the telescoping handlebars.

The M1100 is a happy motor when boost is on the happy juice. The motor hits the arms and wrists with shoulder-dislodging pull. When full on, the sled is goose down light, horsepower and torque keep the power-to-weight at a minimum. The sled will roll into a sidehill with ease. But, if lopping along at a slow gait, like 10 mph or less, and the single throttle body is rapidly pinched closed, bring land speed down to zip, a rider – me – topples over the handlebars and hood. This is reminiscent of RX-1 Mountain days; the motor brakes hard. 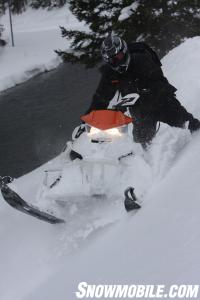 For die-hard Cat fans the horizontal steering of the M1100 turbo may take some getting used to.

For meadow bashing and trail slamming, the M1100’s laydown steering post feels natural with its fixed height, but I feel for explosive tree running a vertical post that is telescoping would help the rider maneuver the heavier-than-M8 deep-powder stomping. But readers, this can’t be, as the chassis has no room for M8 Sno Pro steering. Now, the M-series engineers knew this would be a complaint for some, so they concentrated on balance to help the rider and its vehicle hit the sweet spot. So, my nit mentioned above is nearly erased as the sled is nicely balanced through the bars.

The M1100 is going to humble many chutes in Canada, Colorado, Utah, Montana, Washington, Oregon, Idaho and Wyoming. Aftermarketeers with boost controllers and EFI maps are going to amp up the motor to bust out insane horsepower and torque, 220 horses will be just dollars away. I believe Arctic Cat will be pleasantly surprised at the attention its M1100 turbo sleds will receive from the tuner dudes.

The M1100 turbo has chocked off the bandwidth for many chat rooms. At the West Yellowstone World Snowmobile Expo, March 2011, the line formed by the curious stretched around the OEM exhibitors to the point where Cat front men were exhausted. The excitement is dripping from the sweaty horsepower junkies.

My time on the M1100 proved these facts. Down the trail it is hot sauce fast. Through the Goliath whoops, it is scary smooth and in-control. When pulling the nose around in a deep-powder turn on a sassy 30-degree slope, the nose obeys throttle and driver input. The narrower ski-stance is a must. The 2.25-inch Power Claw track works well and handles the power with ease. But, for this kind of horsepower, the lugs may need to grow a half-inch to 2.5-inches.

I am proud of Arctic Cat for stepping out of the norm and offering a muscle sled that is unlike others. Will the consumer flock to it? I say yes. Will sales equal the M8 Sno Pro? Maybe, maybe not. Regardless, a new niche is carved out and Cat will be the profitable recipient.

My time on the ProClimb M1100 Turbo at West Yellowstone and Island Park, Idaho was limited due to the fact while at West, I fell ill for part of the evaluation period. At Island Park, several weeks later, the demo M1100 Sno Pro Turbo coughed up a coolant leak, yet with the time I had, I rapped knots on the boosted four-stroke’s head.

I learned the M1100 Sno Pro, though heavier than its sistership, the M8, responded very well to back country handling due to the fact the ProClimb chassis is well-balanced; Cat’s engineer’s thought through this mountain sled. This snowmobile is not a stretched trail sled or crossover, it is pure mountain. 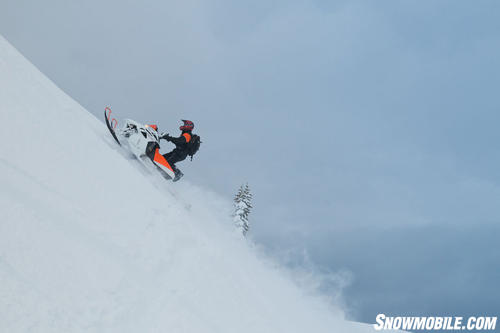 Powder riders will like the wide-open climbing power of the Turbo Cat.

When the big M’s boost hits its stride, the 1100 ProClimb chassis is scary fast, and is sure-footed on the bumpy trails. Will this sled conjure a fan base? Yes. This factory-built turbo will appeal to those mountain riders who like banging on the big long hills – where turbo power dominates – and who like modern four-stroke technology that can be pumped up with aftermarket fuel and boost maps.

Arctic Cat did not build a one-year wonder. Cat’s M1000 Sno Pro in the original M chassis was a success, and I believe this sled will follow the same success path.