The mighty Arctic Cat M8 remains mighty in motor. Cat’s collaborative work with Suzuki continues to pay off with every slap of the loud lever. But, Arctic Cat’s 2013 ProClimb M8 is a vast departure from the M8 of year’s previous. Now the mountain-ready Cat has moved to a common platform shared by two motors – the 800 two cylinder two-stroke and a two cylinder four-stroke. Also, Arctic Cat wanted the trail and the mountain segments to share many components. By sharing platforms and limiting motor choices, Arctic Cat found a way to reduce production costs by streamlining the assembly line.

In our long time riding and reviewing of the 2012 M800, we found some quirks and newbie jitters: such as an out-of-sync steering ratio, a rear suspension that trenched-out the track rather than floating it, and some belly pan and side panel lines that were not as clean as Cat’s competitors. 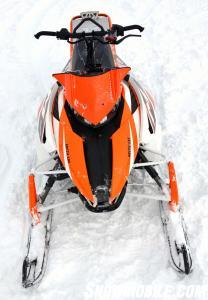 The M8 is aggressive in appearance. Yet, some of its sharp angles prevent the vehicle from being slippery smooth through deep powder.

For 2013, Cat corrected the steering ratio problem by building a new stronger single-cast spindle that places the steering rod at a different location that allows the skis to swing in sync with the handlebars. Two steering arm mounting locations are built into the spindle that gives the driver a preference as to how fast or slow he wants the steering to respond. This change increases the steering degree/radius by 10-degrees. Arctic Cat reports the “Triangulated A-arm attachment geometry increases strength and creates a swept-back attachment point, giving the sled a better approach angle – preventing it from diving directly into holes or ruts.”

To give the M8 greater finesse in the trees, Cat cinched up the ski stance by pulling it in to 38 inches (a narrowing of three inches from the previous year), which can be pushed to 39 inches. This quickens the M8’s sidehill and wrong-foot-forward maneuvers.

When the 2012 season hit, I was skeptical, rather disappointed, the ProClimb M8 did not have the Diamond Drive direct drive system. After spending a season on the 2012 ProClimb M8 Sno Pro and feeling the stout Suzuki twin throw its mojo to the track, I am not disappointed at all. We welcome the chaincase system, and this system remains on the 2013. To increase belt life and assure life-long clutch alignment, Arctic Cat built a torque link into the M8. Says Cat, “The Torque Control Link maintains perfect belt tension and alignment. Better alignment means a longer belt life….” The chaincase with chain tensioner, torque control link, and large brake rotor are part of Cat’s ADS – Arctic Drive System. 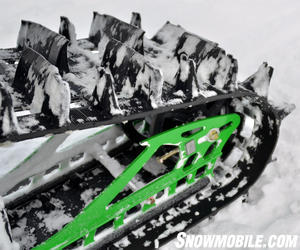 The PowerClaw track for 2013 gives the M8 bragging rights as the track king.

The ADS has a new job for 2013, spinning a very tall track. The M-crew knew to be tough in the mountains it needed to stake a claim: the tallest lugs. The PowerClaw track, which we feel is a light and superb track, has a lug height of 2.6-inches. This track is taller than Ski-Doo’s Powder Max II, by one-tenth of an inch, and two-tenths of an inch taller than Polaris’ RMK track. This shows that even though Cat does not have Polaris’ final belt drive or Ski-Doo’s tMotion system, it has the track.

The rear suspension’s front mounting holes – where the bolt holes reside on the tunnel – were dropped 0.75 of an inch. This drop allows the rear suspension’s approach angle to be below the ski’s plane. This gives the M8 the ability to flatten out when launching in deep snow, thus not trenching out as the 2012 M8 was inclined to do. Also, with the drop, there’s comfortable room for the tall track to fit in the tunnel.

The ProClimb chassis utilizes a triangulated upper-spar assembly design, which provides strength and less flexing than the M chassis of yore. The shock mounts, for all points, are designed to transfer energy directly to the spar assembly, which, according to Cat, is the strongest point of the chassis. This minimizes impact energy from transmitting through the handlebars and tunnel.

The M8’s motor is a laydown twin cylinder two-stroke (exhaust and intake ports on same side – front) that has powered the M8 since its inception. In 2009, the motor became known as the 800 High Output (H.O.) as Cat pulled more ponies out from the twin by working over timing and exhaust port duration – opening and closing via the piston skirt. The motor is a brute. The battery-less fuel-injected twin is reliable and has a low history of mechanical problems. 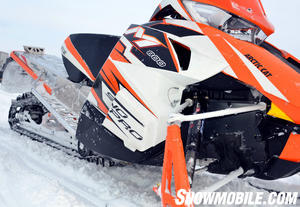 The M8’s spindles do not reach out and grab bushes, trees and Sasquatch; they run clean around obstacles. The vertical steering post is much appreciated and needed for aggressive attacks. The 2013 M8 Sno Pro comes equipped with Cat’s telescoping handlebars. These bars are a critical part in the M8’s handling. Incremental movements change the snowmobile’s tree running characteristics. The telescoping bars allow the driver to dial in the sled’s hit. When we take the fight to a mountain and its fellow trees, we drop the bars and begin hitting away. When we take on long side hill runs, we inch the bars up for standup riding and roll along in confidence. Tall and short riders benefit greatly with these adjustable bars. 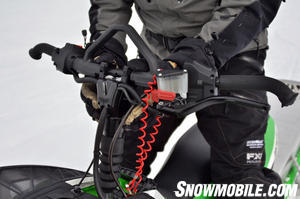 The telescoping handlebars are appreciated and much revered; these amplify body positioning. Cat scores big here. Note the warming box behind the handlebars. Cat did well here.

It is in the open where we give our editor’s preference to two mountain snowmobiles, the XM Ski-Doo Summit X and SP 154, and the Polaris RMK Pro 155. However, we need to be clear, this does not mean the Arctic Cat ProClimb M8 Sno Pro 153 is out of the bracket. It is not.

The M8 153, and its brother the 162, is very much a contender to be a king-of-the-hill mountain snowmobile. For example, on the professional hill climb circuit, the Rocky Mountain Snowmobile Hillclimb Association (RMSHA), the M8 claimed a plethora of wins in stock, improved stock and modified classes. For the World Championship Hillclimbs in Jackson Hole, Wyo., the M8 and its driver were crowned King of Kings – the absolute best. That can’t happen if the driver felt the ProClimb could not climb.

The Suzuki-powered M8 and ProClimb chassis work well together. For everyday riding, the M8 attacks mountains and slices out sidehill lines with ease and finesse. The ProClimb effortlessly initiates left- and right-side rolls. The changes made to the M8 for MY2013 give the ProClimb M the hardware to soldier on.

Here is a listing of its good stuff:

That being said, nothing is ever perfect and here is our wish list of improvements for the future:


• Smoother and more rounded side panels and belly pan, especially behind and under the A-arms
• A more tapered nose
• A powder-compliant ski
• Modified engine cooling through the tunnel that reduces snow thaw and freezing at the tunnel’s end (think HCR)
• Balance – weight pulled off the nose. 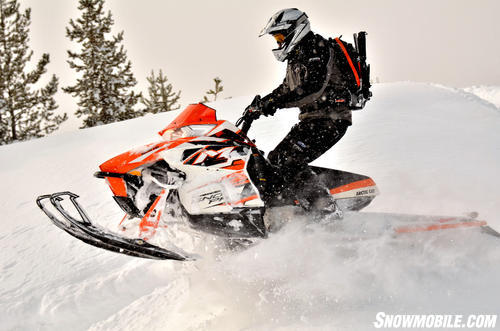 On a nice-to-have topic, Cat added a hot box for gloves and goggles. This box, which lies between the instrument pod and handlebar, captures warm engine heat to bake a pair of fogged-over goggles or warm a pair of gloves.

The M8 has a strong heritage. Arctic Cat pulled off a tough assignment to build one chassis that accommodates two motors – the 800 twin two-stroke and the 1100 twin four-stroke. The M8 is nasty looking and feels very much an M and more. But, as a diamond in the rough, it needs some smoothing out and polishing, specifically in the areas of floatation.

Three thoughts stand. First, the M8 has its strong Suzuki motor. The Arctic Cat H.O. 800cc twin is a powerhouse with a proven track record of reliability. The Suzuki-built twin delivers incredible muscle whether in stock form or in many modified forms. Piped, ported or turbocharged, this motor is a favorite amongst aftermarket engine builders.

Second is its PowerClaw track. For 2013, it comes with a whopping 2.6-inch paddle track that makes the PowerClaw the tallest track in the industry, be it the 153 or 162. My on-the-snow impressions state this track really hooks up and delivers tremendous deep snow performance. 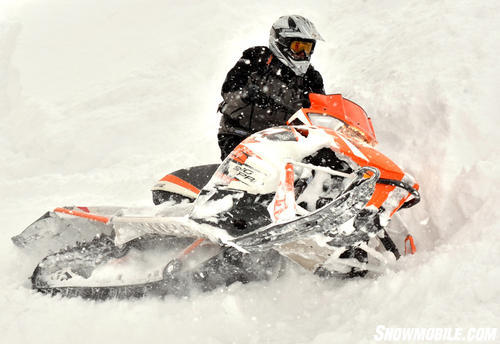 Kicking in sidehill cut is effortless due to the narrow ski-stance and improved steering ratio. Here, Sr. Test Rider Kevin Allred takes the M8 through some nasty trenches with ease.

Third, the narrow ski stance allows the M8 to roll into a sidehill with ease. Taken along with the narrower stance is the additional steering ratio the M8 received. Tthis allows the 2013 to hold a sidehill better than the 2012 M8 Sno Pro.

The cockpit has a compliant ergo atmosphere that makes the M8 feel controlled and comfortable, from the handlebars to the seat and down to the running boards. For a cool warm gesture, I like the “warm” bag near the handlebars, a very convenient box for drying goggles or warming gloves.

The 2013 Arctic Cat M8 Sno Pro is still a force to contend with in the mountains. It remains, for me, a favorite to climb aboard and hit the hills.

The 2013 Arctic Cat M8 SnoPro offers improvements from the 2012 version to make it sidehill and handle deep snow easier. We continue to be very comfortable on the sled and look to the future where we see Cat putting a little more mountain thinking and little less trail thinking into the M-series. But the improvements from last year to now definitely make this season’s M8 a better ride for us who ride the steep and deep.