The Polaris Rush is the boldest and most innovative chassis/suspension technology released this season. Indeed, the Rush represents a breakthrough in chassis and suspension design that puts Polaris in contention as one of the finest handling high performance trail sleds. As Polaris personnel have clearly stated, the company’s goal is to reestablish itself as the leader in terrain performance. To attain that goal, the staff and engineers at Polaris have thought outside the tunnel, and created a chassis and suspension package that closely replicates a motocross bike. 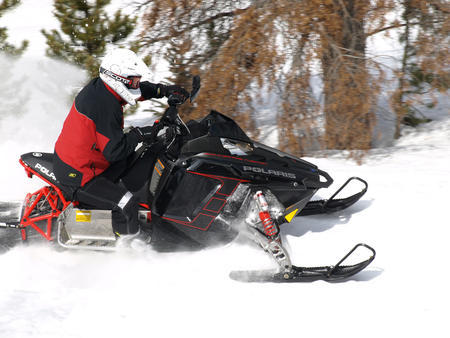 Using a motocross-inspired suspension makes the Rush perform more smoothly in the rough.

To compare the Rush for 2010 with the Ski-Doo REV introduction for 2003 reveals some interesting similarities and striking contrasts. The REV initially appeared in 2002 as a Pro Open snocross race sled and for the 2003 model year, the first-generation REV production sled was released to the public. Interestingly, early in the Rush’s development process, Polaris focused development of the sled for the high-performance trail market. As a result Polaris stuck with its current IQ platform to build the 2010 Polaris IQ 600 snocross sled. However, the Rush 600 is slated to compete in cross-country racing on the USCC circuit.

Before diving into all the technical aspects of the Polaris Rush, I will cover key chassis and suspension updates to the IQ chassis and suspension platform. In particular, the 2010 Polaris 800 Dragon IQ has received important upgrades that should produce improved performance and reliability. The rear skid has been strengthened and improved in several key areas. According to Polaris engineers, the 2009’s front and rear arms were showing signs of high-cycle fatigue, so the welds on the 2010’s arms have been improved to maintain strength in all conditions. The rear torsion springs were found to be a bit soft, and therefore Polaris has installed heavier gauge wire rear spring for a firmer spring rate. To complement the change in spring rate and improve ride control, the rear shock’s high-speed compression damping has been recalibrated. In addition, the center shock is now a conventional IFP gas shock, rather than a remote reservoir shock. Also, the IQ Turbo Dragon and 800 Dragon IQ feature IFP needle shocks fitted to the center shock. 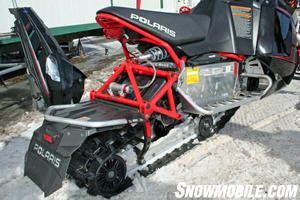 The Pro-Ride rear suspension is a rising-rate design that closely resembles the design and function of a motocross bike’s rear swingarm.

Now let’s refocus on the Rush. Development on the project that became the Rush started in 2001, and over the course of about eight years, six distinctly different prototypes or test mules were made. Obviously, Polaris steadily and methodically developed this radical new platform over a substantial period of time. In addition, the Rush was subjected to 100,000 test miles before the production units rolled off the assembly line.

In fact, the Rush is a fascinating hybrid of existing and cutting-edge Polaris chassis technology. While the rear suspension and chassis assembly technology are new, the front suspension is the current Polaris IQ in slightly modified form. The Rush’s IQ front suspension features the same control arms and same geometry as other IQs, but the shocks have been shortened by 5/8-inch to arrive at the ideal ride height. And the upper shocks mounts have moved up slightly which makes the travel a bit less regressive.

But the main attraction on the Rush is the Pro-Ride rear suspension and chassis, and these components set the sled apart from all others. The Pro-Ride is the first production snowmobile to replicate the geometry and suspension action of a motocross bike. To get the most out of any suspension, you need to design a strong and integrated chassis around it because the best suspension technology will not perform to its potential if the chassis substantially bends and flexes. In reality, if the chassis flexes too much, the chassis essentially becomes a large part of the suspension, and shocks and springs won’t operate as designed, and handling and control are seriously degraded.

The Pro-Ride chassis is the backbone of the entire platform and it’s a very rigid chassis, a chassis that’s 300 percent stiffer than the current IQ chassis. The chromoly tubing that attaches to the rear swing arm runs over the tunnel to connect to the steering post structure and the front bulkhead. This configuration ties the entire chassis/suspension structure into a very strong package, meaning the tunnel is no longer a stressed member of the chassis.

The Rush Pro-Ride chassis features chemically bonded chromoly tube frame that runs under the seat to the rear swingarm for incredible torsional rigidity.

In order to maximize the strength of the chassis, the chromoly tubing hasn’t been welded, rather it’s structurally bonded, or in other words, the chromoly tubing has been glued together. According to Polaris Snow Design Engineer Matt Prusak, “The tubing loses at least 50 percent of strength when it’s welded. It goes from like a T-6 down to a T-0.” So the chromoly tubing maintains about twice the strength of welded tubes. In all Polaris Rush chassis there are very few welds and about half as many parts as the IQ chassis. In addition servicing the frame is simple and straightforward, dealership mechanics can heat up the bonded tubes to 300 degrees to remove them and easily bond them back together. A torsionally rigid chassis delivers more precise handling, is more responsive to rider inputs, and an easier to tune suspension. 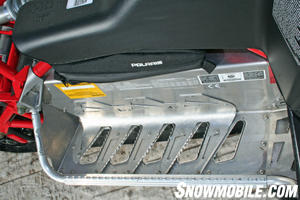 The closed off tunnel features running board reinforcement for greater strength.

The rising-rate Pro-Ride rear suspension is the stand out item on this sled. The rear scissor arm connects to the rear bellcrank frame and then to the coil-over shock. This innovative system accomplishes a number of things. It creates a very progressive lever action, so the shock can effectively provide a rising rate. This provides progressive damping through a wide range of conditions. But, it also protects the shock by taking it from between the track and placing it under the seat, which is away from the elements. Shocks in a traditional rear skid are exposed to dirt, snow, and water. These contaminants eventually enter the shock body through the shock rod. This contamination degrades performance and eventually necessitates a shock oil change to recapture the best ride quality.

The clicker on the remote is also convenient to reach, and you won’t have to chip ice away from the dial to adjust it. Also, shock preload and compression damping adjustment are much more convenient. The coil-over shock has a threaded adjustment collar, so you can easily adjust the preload by hand. In order to make preload easy to adjust, a setup tool allows measuring the spring preload for particular rider weight, so you set the spring preload to the weight of the particular. As I found out, properly setting the preload is vitally important. Also, it doesn’t have any mechanical coupling device. Instead, it is equipped with what Polaris engineers call “kinetic coupling.” According to Polaris engineering staff, a mechanically coupled rear suspension that couples through the spring puts a spike on the spring load. With the Rush, the Pro-Ride rear senses the displacement of the front arm or center shock and maintains a flat rail angle to the bumps, so it’s more of soft couple than a harsh coupling effect. The Pro-Ride rear shock is tucked under the seat yet allows easy preload adjustment, and the clicker is mounted on the bellcrank frame for quick compression damping adjustment.

I had a chance to sample the Rush this past March in Colorado. While I have to reserve final judgment of the sled until I have the opportunity to ride a production unit in a variety of Midwest trail conditions, the sled’s performance from the first ride was promising. It delivered very responsive and precise handling on the trail, and it demonstrated that is was sensitive to rider input. It effectively transferred weight to rear skid under acceleration and the sled had an excellent overall balance. The real test came in a mogul field that was littered with one- to three-foot bumps.

I jumped onto the sled after a 220-pound rider just got off of it. I am 190-pounds and I wanted to see how the sled rode when the set up was too stiff for the rider. As I pounded through the moguls, it felt way too stiff and the suspension wasn’t stroking through much of its travel. Using the Rush preload tool, the spring rate was reduced and the correct preload was set. With the 190-pound rider setup, the sled delivered far plusher and precise control. I could charge through the bumps much faster and more comfortably, and it was plainly evident that accurate suspension setup is crucial for getting the best out of sled. During my ride, the sled felt incredibly composed and I felt confident to tackle the larger bumps. I was also impressed with how forgiving the sled was. When I messed up my timing on a set of bumps, the sled didn’t punish me for the mistake. It allowed me to recover and keep going.

The Rush is definitely a step up from the IQ chassis, but more importantly, it introduces a brand new chassis and suspension concept to the snowmobile industry. Riders will be impressed with the Rush’s suspension performance and control from the big bumps all the way down to the small trail chatter. The monoshock rear swingarm design certainly revolutionized motocross and Polaris certainly has upped the ante for top honors in the high-performance trail sled segment.