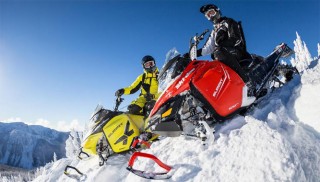 Innovative ski design and return of Blizzard among highlights

For model year 2016 Ski-Doo brings back the popular Blizzard name, creates a new Enduro package for the Renegade series, makes T3 package refinements across its best-selling Summit models and re-invigorates its touring lineup with an updated 1200 4-TEC engine. But wait, as they say in late night infomercials, that’s not all.

As you might expect from the company that created the REV platform and changed the way we ride, Ski-Doo further enhances the ride that began with the rMotion rear suspension and followed with the upgrade to RAS2 on the front suspension. For 2016 Ski-Doo enhances its ride and handling package with the Pilot TS adjustable ski, the first-ever adjustable ski in snowmobiling. Manipulating the adjustor knob in front of the ski leg effectively raises or lowers the ski’s carbide over a half-inch range for more or less bite. Combined with the rMotion and RAS2, the Pilot DS adjustable ski lets you quickly fine tune your ride for changing trail or snow conditions. 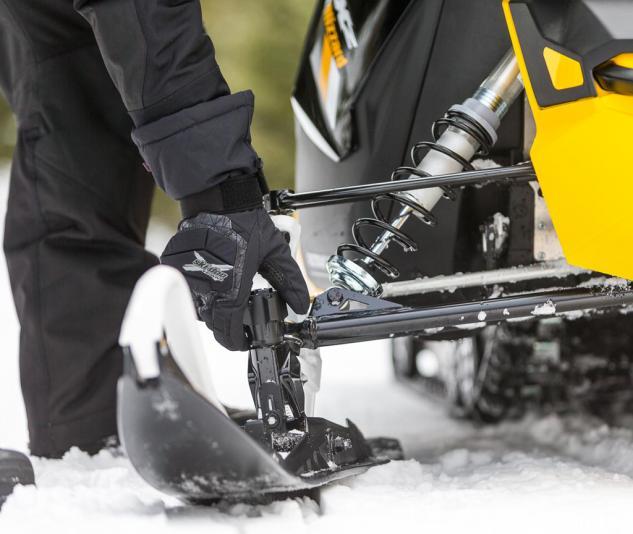 Ski-Doo’s innovative Pilot TS adjustable ski allows you to dial-in the carbide up to a half-inch to get you more on-trail bite.

This unique ski is part of what Ski-Doo calls its “era of specialization,” in which the company introduces new thinking to old technology, expands established technologies and combines features to create new more rider-friendly models. For 2016 that new think applies to updating its oldest four-stroke engine, the 1200 4-TEC, with the same Intelligent Throttle Control and three performance modes as the newer ACE 600 and 900 four-strokes. The expansion of new technologies includes:

• Use of T3 package and three-inch lug tracks on more Summit models • Adding a 129-inch length track and rMotion suspension to select models, including the new MXZ Blizzard • Blending Renegade features with adventure packaging in a new Renegade Enduro model • Moving the 4-TEC engined sleds, including most of the Touring line, over to the narrow, more nimble REV XS platform • Offering RAS2 on more models – Freeride, Summit, Expedition and Grand Touring

With all of this re-packaging going on at Ski-Doo for 2016, don’t look for the GSX lineup. It’s gone, effectively incorporated into the MXZ, Touring or Renegade series. But, there remains a very healthy series of 2016 models, topped off by the popular deep snow Summit.

The 2016 Summit enjoys an expansion of the T3 package to all Summit X models as well as a Summit SP with T3. To make Ski-Doo popular with snowboarders, there is a Summit Burton package based on the Summit SP 154, which can effectively replace the chairlift or get you places beyond the lifts. 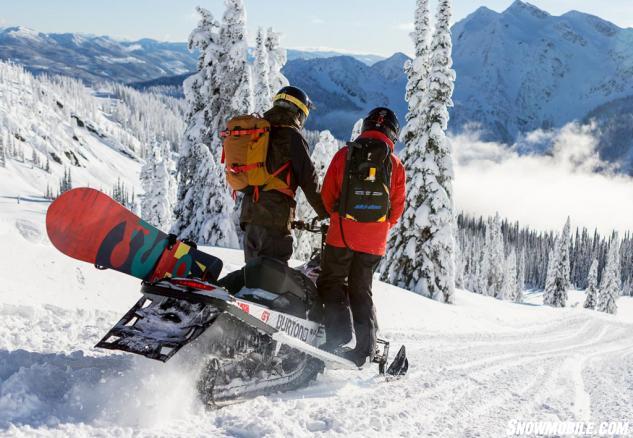 For 2016 there will be five Summit models, that includes a Spring Only buy of Summit X with premium shocks, Pilot DS3 skis, the T3 package and choice of PowderMax with FlexEdge track in three lengths – 154, 163 0r 174. The Summit SP with T3 is an in-season model and offers FlexEdge traction with tMotion suspension. The base Summit SP comes with 2.5-inch track lugs and tMotion suspension and high-pressure gas shocks. The Summit Sport offers a value option for powder hounds that is based on the REV-XP chassis but features FlexEdge traction and narrow ski stance. Rounding out the Summit choices is the Summit Burton. 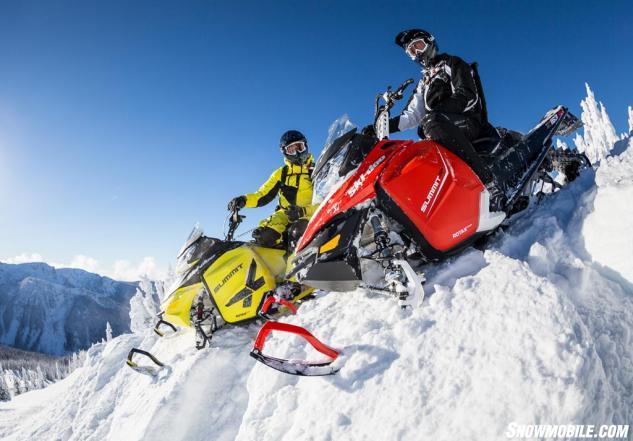 This year’s Summit series expands the popular T3 package from the X model to a special SP version.

Backcountry adventure riders preferring to drop off overhangs and the extremes of out-of-bounds riding will find the Ski-Doo Freeride to their liking. Powered by a Rotax 800R E-TEC two-stroke twin, you can order the Freeride with tMotion rear suspension on a 146 or 156-inch length track. The 137-inch track version features the rMotion suspension, but all come with the latest RAS2 front end. There is also a Freeride calibrated to sea level for those who like to pound the powder in lower elevations. 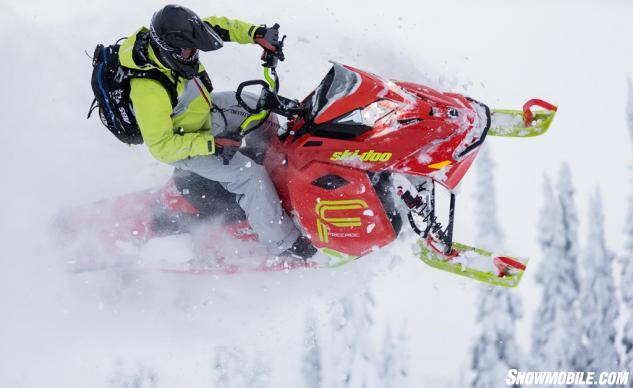 The most versatile sled in the 2016 Ski-Doo line up may be the Renegade series, which will be available in serious Backcountry guise, high performance X-RS mode and a new Enduro package. Of the new for 2016 sleds, three will be offered as pre-season Spring Only buys: 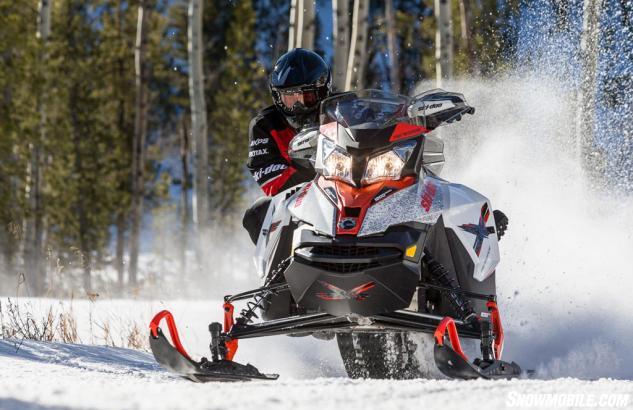 The Ski-Doo Renegade X adds a revamped 1200 4-TEC four-stroke on to the narrow XS platform.

In-season models will continue with the base Backcountry, a Renegade Adrenaline and Sport. New for the season is the Renegade Enduro with four engine options ranging from the four-stroke ACE 900 to the 163hp 800cc ETEC. This sled effectively becomes the best ever all-around sports sled as it offers standard Air Ride rear suspension, RAS2 up front, HPG shocks, the adjustable Pilot TS skis and cross country styling with XC front bumper. 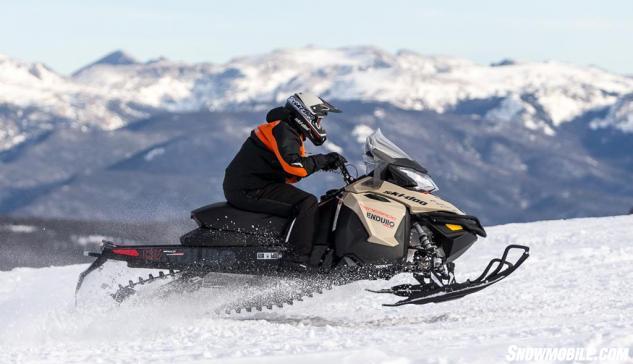 Where the Renegade powers through the drift with a 137-inch track, you can opt for an MXZ with either a 120-inch or new 129-inch length track. The longer track will be standard on the X-RS, MXZ X and new Blizzard. The XRS and X models are available only as early season buys, but the Blizzard is an in-season model. The TNT and Sport models come with the shorter 120-inch track suspension. 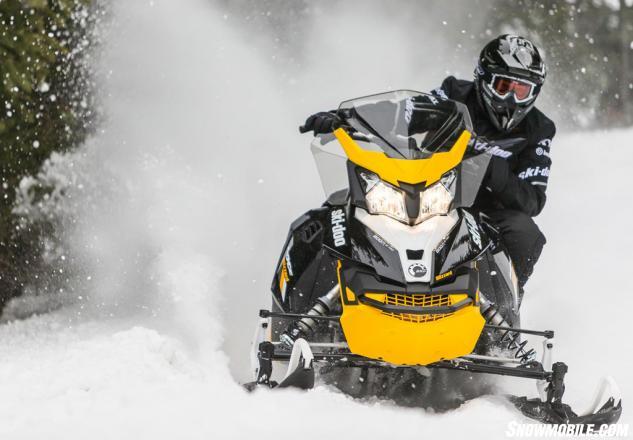 The legendary Blizzard name, which first appeared in the early 1970s on Ski-Doo’s most technologically advanced race-bred sleds, makes return as the ultimate MXZ TNT!

Engine options for the top of the line X-RS include either the 600 or 800 E-TEC twins, while the 2016 MXZ X adds the updated 1200 4-TEC four-stroke to the mix. The new Blizzard offers the same 600 and 800 E-TEC options as well as the three-cylinder 900 ACE and 1200 4-TEC four-strokes, which are the same engine options for the MXZ TNT. The value-priced MXZ Sport gets either the older carbureted 600cc Rotax two-stroke or the 600 ACE four-stroke with the three engine modes and throttle-by-wire control.

Just as Ski-Doo has paid attention to the specialty niches of trail, off-trail and powder riders, the Quebec-based snowmobile pioneer refashioned its touring line for 2016, placing virtually all two-up models on the more nimble REV-XS platform and smoother styled cab. At the head of Ski-Doo’s 2016 touring class is the Grand Touring SE, powered by the updated 130hp Rotax 1200 4-TEC with its nearly 20 miles per gallon economy and throaty tone from a lighter weight muffler. 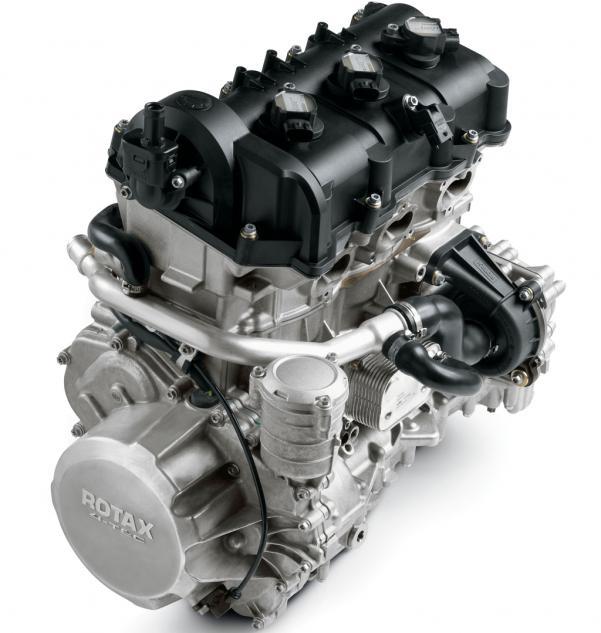 The Grand Touring LE is a slight step down in tech benefits, but well equipped with the RAS2 front suspension and rMotion rear unit. This touring two-upper lets you pick from one of three engine options: 1200 4-TEC, 900 ACE or the two-stroke 600 E-TEC. In the value sweepstakes, Ski-Doo offers the Grand Touring Sport with older SC-5M rear suspension and the 60hp 600 ACE four-stroke.

Aimed more at international markets where versatility is valued over speed and high performance, Ski-Doo’s line of Expedition, Tundra and Skandic models fill specific needs. New for 2016 is the Expedition Xtreme, billed as the ultimate performance touring/utility sled. Like the other Expedition models, the Xtreme rests on the proven REV-XU utility chassis with the SC-5U rear suspension. Power choice is the 800 E-TEC, which can readily spin the Xtreme’s 20-inch wide by 154-inch long track.

The only Expedition for 2016 not using the XU heavy-duty chassis is the Expedition Sport, which is based on the REV-XS when equipped with the 900 or 600 ACE four-stroke. The 550 fan-cooled Sport version features the older XP platform and long track.

You’ll find minimal changes in the Tundra models. The Tundra Xtreme adds a newly designed ProLite 16-inch wide by 154-inch long track for the standard 600 E-TEC two-stroke to spin. The Tundra LT comes with a new two-up seat and the Tundra Sport offers a choice of powerplants, the 600 ACE or fan-cooled 550 two-stroke.

Rounding out Ski-Doo’s new for 2016 models are the two wide tracked Skandic models:

What’s new for 2016? Quite a bit, actually. The new adjustable ski will complement nicely the RAS2 and rMotion suspensions. You’ll find more deep snow capability in the Summit line and more off-trail performance in sleds like the Renegade Enduro. The short trackers see the return of a legendary name, Blizzard. And while the touring series provides great on trail comfort, these new-for-2016 models offer enhanced on trail handling. Check your Ski-Doo dealer for model availability, as some popular models will be Spring Only buys.