Setting the standard while driving innovation

The CVT (constant variable transmission) is an area of relentless development and over the past decade TEAM Industries has released several innovative driven clutch systems, including the TSS-98, the TSS-04 and now the Tied secondary clutch. Since clutch performance vastly determines how well a sled accelerates and decelerates, a sled with a finely tuned clutch system or the best ratio for a particular set of conditions significantly outperforms a sled that doesn’t have a dialed-in setup or relies on the stock setup for all conditions.

The crew at TEAM has blazed new frontiers of driven clutch performance for well over a decade. TEAM’s TSS-04 clutch system set the standard for driven clutch performance and it is what all other secondary clutches are measured by. Every stock snocross sled uses the TEAM TSS-04 secondary clutch, which includes Arctic Cat’s Sno Pro 600, Polaris’ IQ 600 race sled, and the Ski-Doo MXZx 600RS. 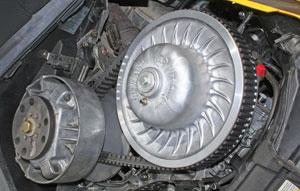 The spring, ramps and pins are installed in the Ski-Doo TRA primary clutch, and the QRS driven system has been replaced with the TEAM TSS-04 and hollow jackshaft.

When Ski-Doo released the radically redesigned XP chassis in 2008, TEAM went about developing a secondary clutch kit to adapt to the sled’s new drivetrain. With the XP, Ski-Doo engineers were able to carve 50 pounds off the previous first-generation REV. In the process of combining parts for function and weight savings, Ski-Doo built a new stock QRS (Quick Response System) driven clutch system, which integrated the jackshaft and driven clutch into a single piece. While most conventional stock clutch systems allow for easy removal of the driven clutch from the jackshaft splines, the QRS system required removal of the entire clutch and jackshaft assembly, which was connected to the top chaincase gear. So removing the clutch or changing the helix on a QRS is neither easy nor convenient, and it prevented the use of any other driven clutch with the stock jackshaft. As a result, an aftermarket driven clutch could not be simply bolted on the jackshaft.

Enter the crew at TEAM, which developed the XP driven clutch conversion kits for the range of Ski-Doo XP sleds. The kit features the TSS-04 driven clutch (and now offered with the Tied driven), TEAM Twin Trax helix, and a driven clutch spring, but it also includes the necessary drive clutch parts to match the shift characteristics of the driven clutch. Therefore, it also includes a set of drive clutch ramps and a pin kit as well as a primary spring. The key feature of the conversion kit is the TEAM hollow or gundrilled jackshaft because it allows installation of the TSS-04 and Tied clutches in the XP chassis.

The question was, would this snocross ready clutch system improve performance of my own Ski-Doo TNT 500SS? Before going to test the new XP conversion kit at the TEAM’s snowmobile skunkworks at Detroit Lakes, Minnesota, I had racked up well over 1,000 miles on a bone stock 2008 Ski-Doo MX Z TNT. Over those miles, I was able to form a solid impression of the QRS system performance. The clutching delivered respectable but not stellar performance. It provided a smooth and responsive upshift and a steady but not crisp backshift in a variety of trail conditions. While the stock clutch was strong yet not spectacular, it must be said that better performance could be extracted from the stock setup with a more aggressive helix and set of weights for the trail.

Once at the skunkworks, I met with the TEAM Snowmobile Product Manager Mark Schiffner, and we went over the sleds that I would take out for several glorious hours on the trail. One was a 2009 Ski-Doo MX Z Four-Tec 1200 Renegade and the two-stroke sibling was a 2008 Ski-Doo MX Z TNT. Both carried the new TEAM XP clutch conversion and both were close to stock. However, the TNT had a few accessories, an MRBP lightweight canister and the battery had been removed to save some weight.

Out on the ditch lines of County Highway 21 and around the trails of Detroit Lakes, I sampled TEAM’s technology for both two-stroke and four-stroke Ski-Doos. It was certainly an eye-opening experience. With the conversion kits installed and dialed-in for the conditions of that day, the improvement in acceleration and backshift performance was nothing short of stunning. In essence, the clutch kit had transformed the sled, dramatically improving power delivery throughout the entire rev range. While it felt stronger on the bottom end, the TNT packed a wicked mid-range response and accelerated much faster to top end. From the seat of the pants, it seemed like a 3-5 mph improvement. In most conditions that day, the TNT would rev very quickly, transfer weight to the track, lift the skis off the ground, and deliver an awe-inspiring midrange rush, which was not present on my TNT with the stock clutch system. The 4-Tec Renegade produced a lot more useable torque and accelerated much harder when compared to the stock MX Z 4-Tec with 120-inch track that I had ridden earlier in the season, particularly in the mid-range. 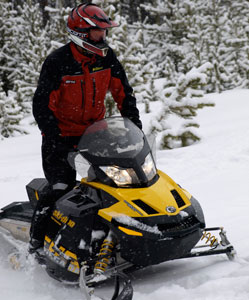 TEAM innovation provides improved performance on and off trail riding.

In a certain sense, it felt like the transmission system had been freed up because the upshift was far better and the backshift was equally as fast. But the improvement in performance not only meant that both sleds accelerated faster, but after braking for a corner, each sled backshifted very quickly to keep the power on tap. This afforded me as the rider extra control and confidence because the sled felt more nimble. If I needed to lift the front end up to hit the top set of roller bumps or stutter, the sled quickly responded when I hit the throttle lever. I was able to grab the throttle and get the front end up so it did not fall into the holes. A more responsive sled is a much safer sled.

The TSS-04 makes this performance possible and its key attribute is the floating spider and the bushing on the moveable sheave. The design of the TSS-04 separates shifting function, which is the floating spider with rollers from the alignment function, which is the post of the helix. The separation of these two functions produces efficient and strong performance. The dual rollers follow the aluminum helix profile, and as evidenced in my test ride, the upshift was strong and pronounced and the backshift crisp and quick. The significant increase in acceleration and backshift performance of the XP conversion kit with the TSS-04 was truly impressive.

When I was at the skunkworks, Schiffner told me that a new clutch system was in the works which would even top the performance of the TSS-04. About six months later, I found out what TEAM had up its sleeve, and it was yet another innovation in clutching —the TEAM Tied driven. It’s a remarkable step forward in driven clutch design.

The first thing I noticed about the Tied driven is that it’s visually distinct as the two cam rollers on the stationary face are exposed in the moveable sheave. But how it operates sets it apart from competing clutches. When a driven clutch shifts and the roller cam slides up the helix as the clutch opens, the inner clutch face or moveable sheave rotates in the opposite direction from the outer clutch sheave or stationary sheave. But Tied’s big innovation is both clutch sheaves rotate in the same direction as the clutch upshifts (opens) and backshifts (closes). In fact, the moveable sheave follows the rotational direction of the stationary sheave, and hence it’s tied to one another and not shifting in opposite directions. 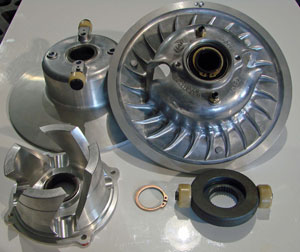 The moveable and the stationary clutch sheaves on TEAM’s Tied secondary move in the same direction for far greater efficiency and performance.

Why is this such a big deal? When the clutch sheaves open in opposite directions, the belt scrubs on the clutch faces and creates friction. This belt scrub creates higher belt temperatures, more belt wear, and more heat. And as we all know, friction and heat in any transmission is the enemy of efficiency.

The increase in efficiency means that more torque is transferred into the clutch and consequentially through the transmission system to the track for greater performance. On traditional clutches, you have to sacrifice upshift performance for a better backshift and vice versa. A higher rate spring traditionally provided a stronger backshift, but the upshift is typically hindered because the belt has to overcome greater spring pressure. The Tied clutch has managed to gain performance on both upshift and backshift because the rotational direction allows the clutch to run lighter springs. This greater efficiency means that the clutch uses a lighter spring and helix angles can be commonly increased by 14 degrees over the TSS-04. According to TEAM, acceleration is very strong and top-end is increased because the clutch doesn’t have to overcome a big spring at shift out, and the light spring allows for quick precise backshifts.

Once again, racing has been the test bed for the latest TEAM clutch. According to Schiffner, the Christian Brothers Arctic Cat race team is using the Tied clutch and recently picked up another few miles per hour with the clutch.