Attendance Up At Snowmobile Demo Tour

Blaine, Minnesota’s Sport Expo Center played host to one of the snowmobile industry’s many end of season “demo” tours. The public display of the sport’s 2014 models ran two days in the northern Minneapolis suburb, starting with a Friday night showing of the newest sleds and technologies available from Arctic Cat, Ski-Doo, Polaris and Yamaha.

Within the first 90 minutes of opening to the public at 9 AM on Saturday, April 6, more than 600 snowmobilers had already arrived. Tom Anderson, the man responsible for arranging the tour’s many stopovers from East to West coast, stood watchfully by the entrance, quickly clicking off each attendee – 649, 650, 651… 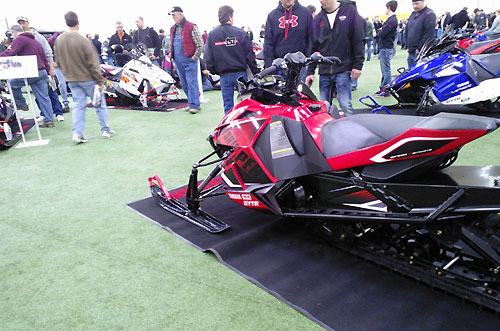 Yamaha’s new Viper series drew attention at the expense of its proven models, but Yamaha gained more overall interest than in years past.

“Attendance is double from last year’s tour,” he told Snowmobile.com. “At this time a year ago, people that came were frustrated because they hadn’t been able to ride much at all. There just wasn’t any snow. People were already playing golf and getting their boats ready for fishing.” 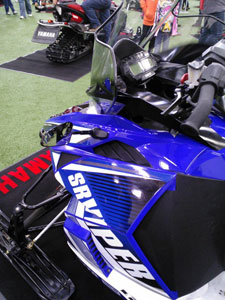 Anderson explained that this year’s many “demo” tour stops, which began in the East, indicated a good level of interest in the new snowmobiles. He noted a distinctly upbeat crowd this time around as compared to last season. “Of course,” he explained, “snow has a lot to do with the improved attitudes.”

In many parts of key Midwestern states, there was still ride-able snow as the show opened. In previous seasons, snow amounts had been low and temperatures higher than normal.

Talking with local manufacturers’ sales representatives backed up Anderson’s optimism. According to demo tour regulars, Yamaha’s models got the most interest seen in many seasons as Yamaha enthusiasts wanted to see for themselves this new blend of a Yamaha and Arctic Cat collaboration. Although Arctic Cat enthusiasts in their Cat jackets and caps populated the Thief River Falls brand’s area, they could be seen stopping to check out the newest Yamaha breed.

Anderson noted that geography played a big role in which brand’s display area got the biggest play. “Ski-Doo drew the most interest in the East,” he said. “Here in Minnesota, home to Arctic Cat and Polaris, they get more snowmobilers checking things out.” 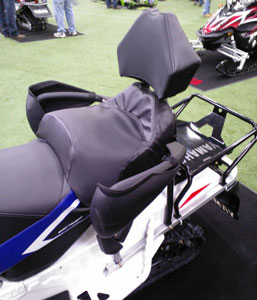 Sled makers dressed up models with the latest accessories like this optional passenger seat.

Give the four snowmobile manufacturers credit. Although it’s a costly haul to have semi-loads of sleds running across the North American snowbelt from venue to venue, it’s more cost-efficient when they all work together in a singular coordinated effort. And, when the displays go up, the sled makers don’t miss a trick, utilizing their local district sales reps and dealers to be on hand to interact with consumers.

The sleds play into the action as many exhibit add-on accessories such as the latest graphic “wrap” option or how the basic sled model interacts with the latest “snap” on luggage or two-up seat option. These demo tours allow the sled makers to showcase the latest in parts, garments and accessories, which can plant the seed of “must have-ism” with potential buyers. Where an extended service warranty can’t be seen, a new colorful wrap option can. Consumers can sit on an optional snap-on passenger seat or check out a strapped on fuel can on a LinQ-equipped Ski-Doo display sled.

With hoods open and side panels removed, the manufacturers showcase their latest technologies. Ski-Doo put three engines on stands to show its “green” technologies of E-TEC two-strokes and ACE four-strokes. A new ACE 900-engined model had its access panels removed to demonstrate how low and compact it sat in the sled. 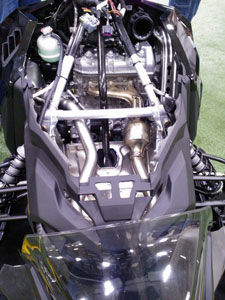 “Look how far back that engine is in the body,” observed one attendee at the Ski-Doo display.

Kids could be seen climbing on various models, usually brightly colored ones with racy lines. They called out to their dads, “Look at this one, Dad!” But, frequently Dad was looking at a brightly colored and sporty one of his own liking. Getting his attention at this demo tour wasn’t always easy.

Frankly, attending the demo tour rewarded this cynical snowmobile veteran. Despite the intimation that snowmobile advertising leaves with us, where only young 20-somethings with their fresh legs and reflexes of a snocrosser go snowmobiling in this second decade of the 21st century, the demo tour offers a different view. It’s a view of a general population of snowmobilers that includes that 20-something demographic but also embraces older riders, middle-age riders and young family men who brought their kids along to introduce them to what’s new in snowmobiling for 2014. It is these kids who have to make up the future of the sport. And, thankfully, we saw quite a few of them, excited and enthusiastic and just happy to spend time with their dads and, yes, a good number of moms as well.

We were encouraged to see families and young ones at this display. Because, if you are to believe modern snowmobile marketing, that part of the snowmobiling equation doesn’t matter any more. Trail sled sales are down. Two-up touring sleds are sold in inconsequential numbers. What counts are high performance deep snow models and crossover derivatives. These are for the bold and brash riders. The family riders who stay on the trails, who frequently are the club members and trail groomer population seem to have been forgotten, except at the demo tours. 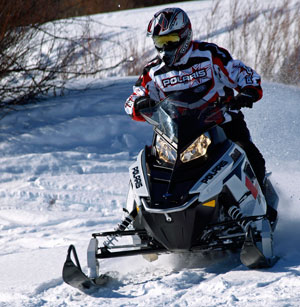 Polaris reintroduces its Indy line as the “value” brand with 9 total models, including this sporty fan-cooled 550 Indy.

We find it interesting that Polaris, where its heritage line of Polaris snowmobiles now makes up only nine percent of overall company sales revenues, has invested in a new line of “value” brand Indy models for next season. Yamaha has forged a deal with Arctic Cat to create a new line of trail sport models, not high end super performance sleds. Ski-Doo invested in a moderately powered 900cc four-stroke with new to snowmobiling throttle by wire technology. And Arctic Cat is bringing back both the once popular ZR series and an all-new El Tigre with a brand new Arctic Cat 600cc direct injection engine.

But to increase sales, snowmobile companies need snow, and enthusiastic consumers and new or returning buyers. Based on the tour stop at Blaine, Minn. on April 6, we can see a sales increase if snowmobiling enthusiasm is any indication.