How The Sport Of Snowmobiling Changes

The sport looked quite different to industry insiders in the 1970s

As spoiled snowmobile writers, we get to test ride prototypes and early production models. We chose our ride from a pool of loaned sleds. We seldom think of how “real” snowmobilers ride; after all doesn’t everyone have a brand new sled at their beck and call?

The answer is, “No!” But, from looking at the annual worldwide sales numbers of new sleds (129,087), we could guess that was the case. For example, Minnesota alone lists sled registrations of more than 253,000. Adding in Michigan and Wisconsin to that total gives you a geographic area that represents half of all snowmobile registrations in the United States. The snowmobile industry claims there are more than 1.4 million registered sleds in the US with a North American total of about two million sleds registered. So, statistically not everyone is buying new. 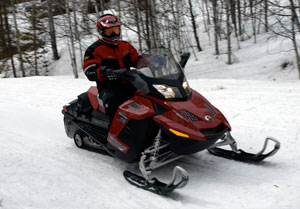 If the industry regained a healthy rebound, there would be ample room for new replacement sales. With two million sleds registered and only 129,087 new ones available last season, that means roughly a potential for one heck of a lot of new sled sales. If folks aren’t riding new, what are they riding?

Based on a purely guess-and-by-gosh observation around our immediate riding area, we see signs of potential growth – or, at least continued optimism. We see many young adult and teenage types riding in our area. They are not on the newest of sleds, but relatively new ones that they either had handed down to them or they bought used. Current used sleds are a good value as most have low miles due to marginal snow winters. 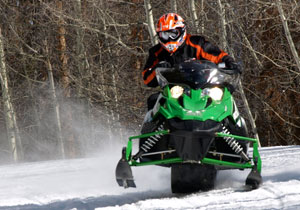 While the state of new sled sales might be dispiriting, we’re not down about it. When we attended a recent snowmobile event in northern Minnesota, we saw two things that raised our spirits about the sport. First, there is continued enthusiasm for winter sports, especially snowmobiling. Second, while there are certainly many older generation AARP eligible riders, we see a rise in younger and younger snowmobiling veterans becoming involved in clubs and associations. The key here will be the willingness of the older crew to welcome, assist and eventually step aside for the “newbies.” They will have different ways to do things, but they will get things done. And we see them involving their families just as their predecessors did. This keeps the sport ongoing.

Looking at basic statistics, you’d think the snowmobile industry is in trouble. Well, if climate change continues as one report in our daily newspaper has it, then snowmobilers in the Midwestern states had best head across the Canadian border to Manitoba, Saskatchewan and Ontario. The report claims that 2012’s record warmth will be the new reality by mid-century. Warm springs, hot summers and snow-less winters will be the norm. Temperately, Manitoba becomes the new Minnesota. Minnesota becomes a new Iowa and Nebraska. Snowmobiling? 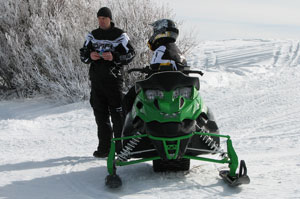 One aspect that makes snowmobiling popular is the ability to share riding experiences with friends.

But we guess that when snowmobile gurus of the 1960s and 1970s looked at the industry, they didn’t see that far ahead. Of course, neither do we. After all, who knew 30 years ago that the Bakken deposits in North Dakota held more oil potential than Arabia? Dead dinosaur fuel shouldn’t be a problem for North America if the resource is handled properly. 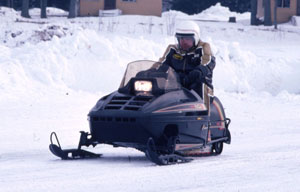 Not all snowmobilers pine for brand new when a classic ride can still hit 100 mph in a speed run.

“We peaked at 500,00-plus sleds,” claimed Francis X. McGrath, at the time Polaris’ vice-president of marketing. Various reasons came into play as some felt the market had reached saturation. Others felt that the industry had done a poor job of selling the sport to the public. Still, others felt that the rural market had saturated and inroads needed to be made to metropolitan areas. There were proposals for smaller sleds that could be carried in station wagons and brought to more rural “play areas” such as ski resorts. The reality was that snowmobiling had peaked! 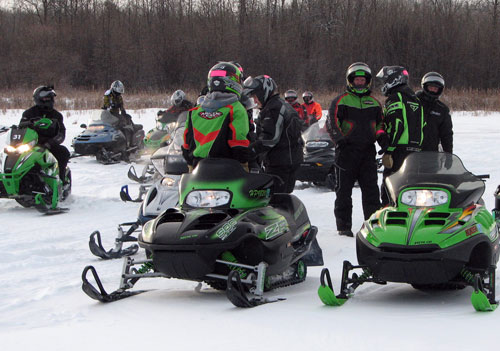 Not all of the 1.4 million registered sleds in the US are new, but that doesn’t keep snowmobilers from continuing to enjoy their sport.

The head of Polaris in the 1970s, Herbert Graves predicted in May 1973 that only 8 to 10 companies would manufacture sleds by the end of the decade. A division of conglomerate Textron, Polaris in the 1980s would eventually revert to a buyout of its upper managers led by Hall Wendel. Well-sourced companies like John Deere, Massey-Ferguson, Kawasaki and companies with smaller resources like Rupp, Roll-O-Flex and others would fade, leaving just four long-term survivors to share today’s 129,087 pool of annual sled sales. 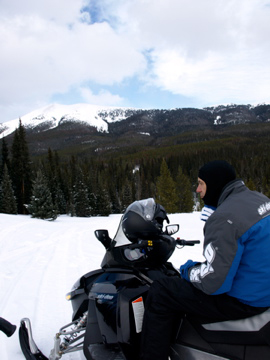 Ironically, despite the lowered sales expectations, the actual number of North American snowmobilers remains fairly consistent with more than 1.4 million registrations in the United States. Although a decade earlier there were about 1.6 million registered units, the drop hasn’t been as precipitous as sales. Can we take that to mean that we are still interested in snowmobiling? We’d say, “Yes!”

When we look at how snowmobilers are spread out, we see about half of all US registrations in three mainstay states — Minnesota, Michigan and Wisconsin. We see 11 states in the mountain west accounting for 263,000 registrations and about 19 percent of the US total. What’s really interesting right now is just how important to the four sled manufacturers that 19 percent has become. Polaris’ top selling sled is a deep snow product, the 417-pound 2013 Pro-RMK. Ski-Doo poured resources into its Summit models to compete. And what we see is an active market, representing 19 percent of total snowmobile registrations, but accounting for somewhere around 50 percent of current sled sales. The traditional best sellers of short track groomed trail and family models have seen sales drop off, partially because of the emphasis on powder-oriented models and the redefinition of the trail sled as being a “stretch” tracked trail model, such as the Ski-Doo Renegade and Polaris Switchback.

Either way and despite the current direction trending toward powder models, give us a few years of serious snowfall in the key Midwestern states and we suspect there would be stronger industry growth and new attention to designing and manufacturing more innovative groomed and big bump models for that market. The potential riders are there. They are younger. They are enthused. And, unlike us, they are riding older sleds. Let’s hope the climate change reports are a few decades off and that the current bitter back to below-zero January cold we are experiencing as we write this is a return to real winter.

Related Reading Lack of Snow Got You Down? Ontario is the Answer – Video The State of the Sport is Doing Well Quirky Snowmobile Ideas What is Snowmobiling’s Next Big Thing? 7 Things Modern Sledders Won’t Need to Worry About