With low expectations, we took the 2014 Polaris 550 Indy Adventure out for a spin around our not-so-top-secret test trail. By the time we returned, our expectations had been exceeded. How could that be?

Based on its parts list, the 2014 550 Indy Adventure appears quite ordinary at best. There’s that veteran 550cc two-stroke air-cooled twin. No modern fuel injection intake here; simple dual 34mm carburetors. The drive system isn’t even Polaris, but an off-the-shelf spec from CVTech. The chassis and track length are common to other 2014 Indy models. The amenities offer differentiation among the Indy models, but the Indy Adventure shares name and features from the more powerful 600cc and 800cc Switchback Adventure models. So, that’s not groundbreaking either. Polaris engineered the 550 Indy Adventure to be a well-mannered and very rider-friendly groomed trail cruiser.

There’s no denying that cracking the throttle on an 800cc Polaris Cleanfire liquid-cooled twin is a thrill, one of the last legal performance highs allowed to us motor heads these days. Certainly rushing the 550 Indy Adventure throttle flipper to the bar won’t result in the speedometer needle scurrying across the numbers’ dial. Performance will be solid, but restrained versus a Cleanfire twin. 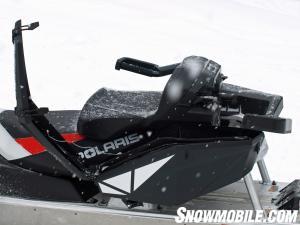 Accessing the Lock & Ride side bags can be awkward, as you must first lift the passenger armrest.

What makes the 550 Indy Adventure such fun to ride comes from knowing that it gives you all it has in as basic and honest a way as any snowmobile can. It is what it is: a moderately powered, yet very trail nimble sled with a good ride and above average storage and solid value at US$8,399. We aren’t pretending that this sled measures up to the 800 Switchback Adventure in performance, which at US$13,199 retails for $4,800 more. But we will tell you that the Indy Adventure will give you a darn good return on investment.

Based on a season with the 2013 600 Indy SP, we like the concept. To us, the Indy returns riders to why they became snowmobilers in the first place. The platform basics bring strength and reliability that includes a triangulated over structure to ensure on-trail rigidity for cornering and ride performance. This basic Indy substructure comes from designs that effectively strengthen and lighten models like the Pro-RMK. Polaris engineering encourages you to think of this lighter weight 550-powered Indy in the same way you think of the Rush and higher performance deep snow models. The front end and the aluminum tunnel bring together all the improvements found on all Pro-Ride designs, which means a 300 percent stiffer chassis than previous IQ-chassis models. 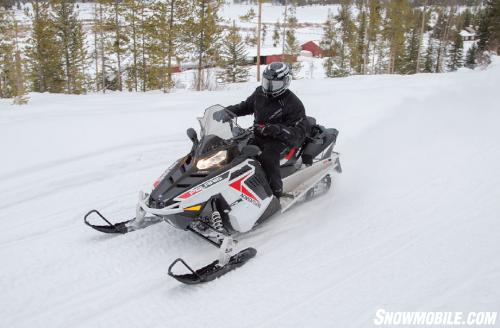 Despite its longer track, the 550 Indy Adventure is a nimble handling sled.

You can feel this improvement on the trail as the 550 Indy Adventure brings you nimble handling and a willingness to turn into corners you’d expect from a higher performance model. We actually found this capability surprising as the Indy Adventure features the longest track and suspension set up in the entire Polaris Adventure series. At 144-inches, the Indy version carries eight inches more Cobra track length than the 800 or 600 Adventures.

Of course, the 550cc Fuji-built twin won’t spin that track with the force of a Cleanfire two-stroke. It can still get you to illegal trail speeds, although you’ll be likely to know that you’re approaching ticketable speeds as the air-cooled motor is noisy. There are no liquid-cooling cylinder jackets to mute engine noise. Plus, by the nature of being air-cooled, the engine tolerances have to be greater to allow for heat expansion, another reason liquid-cooled engines maintain their performance. Using the 550 fan-cooled engine required plentiful air ducting and a move to CVTech clutches. Note the triangulated overstructure that provides strength and stiffness to the sled.

Since the 550 generates about 60 horsepower on a nice cold day, clutching wasn’t deemed a huge performance priority. Ordinarily Polaris reverts to its tried and true P85 drive clutch and one of its own drivens. In this case, Polaris engineers felt very comfortable with an off-the-shelf drive system from CVTech, the Quebec-based manufacturer of the PowerBloc clutch system. While PowerBloc has been around for decades under various ownership, the basic premise remains of a drive system requiring fewer parts than many competitors, requires minimal maintenance, offers quick and simple adjustments and works well with engines such as the Indy’s 550 twin. Prior to switching to its own in-house eDrive system, Ski-Doo featured private-labeled PowerBloc drives on its Rotax 550 fan-cooled twin.

Combined with CVTech’s Invance driven, the PowerBloc 50 drive system worked flawlessly, which was expected. Heck, the drive system could well outlast the sled – it’s that reliable. Although not a speed or power tycoon, the 550 Indy Adventure works very well on the trail. We note that Polaris marketing materials show the Adventure used in two-up mode. Due to its power rating and our singular nature, we view the Indy Adventure as an excellent solo cruiser with occasional two-up usage. It will handle a rider and passenger well enough, but if you are a true two-up sport rider, seriously consider the larger Switchback-based Adventure. You’ll get a better suspension package. Still, we found the base Indy Adventure worked very well for us.

The ProRide-style front end with RydeFX’s gas cell MPV shocks can be tuned for sport cruising via a simple spanner twist. Not as glamorous as the Walker Evans supplied shocks on the Switchback Adventure models, the RydeFX shocks offer a 300 percent range of adjustability, anodized aluminum body, and built-in scraper to keep ice from building up on the shock rod. This specific shock also features a patented “low fade orifice carrier piston” that is claimed to provide a seamless transition from a smooth low speed ride to a firmer controlled higher speed setting. We found the shock control of the 7.1 inches of available front-end travel suited the sled. Add in the lighter and easy steering plastic Pro-Steer skis, which were introduced last season, and this is an easy sled to handle on a long day’s cruise. The Adventure’s generous windshield and side deflectors offer protection from cold and blowing snows.

Polaris uses the same RydeFX MPV shock design on the front and rear control arms of its Indy long-travel parallel rail slide suspension that handle the sled’s 14.1 inches of rear travel. We did not ride two-up, so we can’t say how the sled rides fully loaded. But as a solo cruiser we found the standard Adventure cargo complement of Lock & Ride rack and saddlebags useful, with one caveat; equipped with the convertible passenger seat, you’ll find the system awkward if you want to access the side bags. You need to raise the extended passenger rests before getting into the bags. It’s not a huge deal breaker, but it just seems a tad backward from a group of engineers who have managed to create a powder sled that weighs less than most trail performance models.

As for on-trail likes, we appreciate the tall windshield and the deflectors. We also like that Polaris engineers considered how the Adventure would be used and redesigned the handlebar and steering post specifically for the Indy 550 series, providing a 15 degree flatter post angle that should prove more comfortable for sit down as well as standing positions.

Overall, the 550 Indy Adventure left us with a very positive impression. It is fun to ride and quite versatile. It’s light and easy to handle and completely rider-friendly with electric start, electronic reverse, great wind protection and more than adequate onboard storage. It surpasses expectations as it provides excellent value for your snowmobile dollar.