How Ski-Doo Changed Snowmobiling in 2003

Who in 2003 knew the influence Ski-Doo's REV would wield?

In a bold marketing statement, Ski-Doo’s Model Year 2003 media kit claimed: “Bombardier brings to the table in its Ski-Doo line for 2003… technologies that will redefine snowmobiling.”

Move ahead a decade to Model Year 2013 and we can see that Ski-Doo backed up its claims, causing some waves and ripples throughout the snowmobile business. The biggest stir came with the all-new REV platform that did change how snowmobilers ride sleds and forced the other snowmobile manufacturers to revise their models from butt riders over the rear axle to ride-forward designs that are standard practice in 2013 models. Another change from Ski-Doo was the appearance of semi-direct-injected Rotax twins, which offered cleaner burning and more powerful engines while presaging the era of direct injection two-strokes. 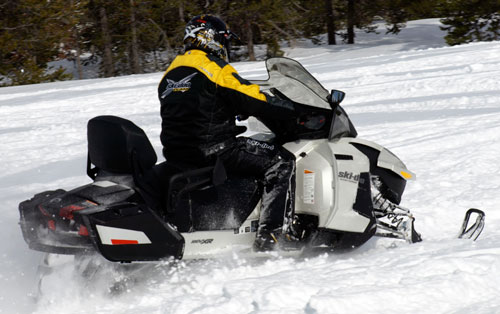 The original model year 2003 REV concept has evolved to host a wide assortment of Ski-Doo models including the Grand Touring with its widened engine bay and stretched out two-up touring accommodations for 2013.

Not known for great humility, Ski-Doo attacked 2003 with forceful claims that it backed up over the next decade. Said Bombardier Recreational Products president, José Boisjoli: “Our intent is to shake up this entire industry with exciting, breakthrough advancements.”

Ski-Doo placed a great deal of its prestige on the new REV concept. The idea centered around bringing the rider back into the fun equation by placing him forward and more upright so he could interact better with the sled over bumps and when cornering. By the time the REV appeared, virtually all snowmobiles had come to look alike, with the engine out front to put weight over the skis and the rider set uncomfortably back toward the rear axle. The REV brought the engine and rider more to the center to give more balance at the snowmobile’s pivot point. In reality many riders already did this on their own as they would pull themselves forward to gain better cornering position and to relieve the butt pounding they would get when traversing bad bumps. Ski-Doo engineers put the rider in the same position via ergonomic engineering.

Moving the rider forward required rethinking where to put the engine, drive clutches and even the steering.

At the time, Ski-Doo claimed that its advanced concepts team tried to bring a bit of motocross-style positioning to the sled world by creating a riding position designed for action. At the same time, engineers redesigned the front suspension, making a lightweight A-arm construction with superior travel action to absorb bumps. And while things like the seat and other components were restyled and rethought, the key to the 2003 REV was its pyramidal frame. The REV chassis with its various pyramid constructs offered six times the torsional rigidity of the racer-inspired ZX tunnel. The REV chassis permitted engineers to relocate the steering apparatus to a position over the engine and more upright to accommodate a rider’s ability to stand up over rough trail sections. The engine ended up being moved back 2.6 inches and lowered 1.25 inches when compared to the previous ZX MXZ chassis. The whole idea was to centralize the sled and rider mass around the drive axle, the functional pivot point. If you think of a kid’s seesaw, you get the REV concept. The center point doesn’t move during the seesaw’s action, protecting the rider. In fact, the REV riding position versus the riding position on the ZX platform effectively moved 12 inches forward and an inch higher.

This pyramidal design made the REV 600 percent stronger than the traditional construction ZX platform.

When we test rode the prototype 2003 REV models in a springtime evaluation, we immediately felt more comfortable with the ergonomics, but Ski-Doo had not fully refined the front suspension action, leaving us under-impressed as the test units yawed severely. By the time production rolled around, Ski-Doo had corrected the issues by refining the suspension shocks, springs and fine-tuning the sway bar action. What a world of difference that made.

Of course, with such a wild new concept, the competition pooh-poohed it. Except, of course, as is now obvious, every other sled maker got to work bringing ride-forward technologies to their product as Ski-Doo not only refined the concept but also began to spread it throughout the line. 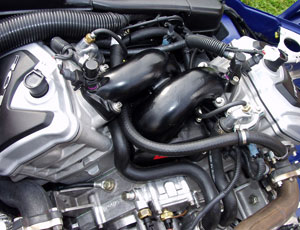 A decade ago Ski-Doo relied on V-twin power for its touring-oriented sleds. The V-shape powerplant lives on in BRP’s Can-Am Spyder trike.

If you may have forgotten, about this time the United States Environmental Protection Agency (EPA) set its sights on cleaning up emissions on small engines from lawn mower motors to snowmobile engines. It was in this period that Yamaha introduced the first true snowmobile four-stroke performance sled, the RX-1 with its high-revving four-cylinder motor. It was one way to go green and one that Yamaha has followed throughout its sled line.

Ski-Doo’s Rotax engine partner brought two technologies to bear in that 2003 model year. Like Yamaha, Ski-Doo offered a four-stroke. However, it proved to be a stopgap until Rotax could bring the 1200 4-Tech triple cylinder and 600 ACE twin cylinder to the product mix. The 2003 one-liter four-stroke offered some advantages sitting in the top of the line Legend Sport. A V-Twin, the Rotax engine offered lowered center of gravity to fit in the ZX platform’s engine bay. The V-Twin was quite a contrast to the new semi-direct 800cc two-stroke, but Ski-Doo claimed that both designs increased fuel and oil economy up to 25 percent and reduced emissions by as much as 50 percent. 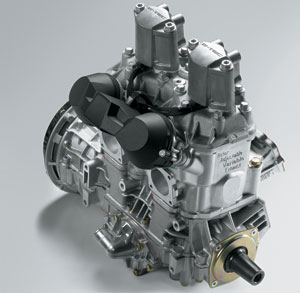 Ski-Doo worked to meet EPA requirements with semi-direct injection, but has blown by that with its series of direct injected two-strokes, which are light in weight, use less fuel and oil and substantially reduced emissions.

The Rotax 2-TEC 800 SDI featured weight and power akin to two-strokes of the time but with green EPA advantages. The 2003 SDI motor used two injectors per cylinder to deliver atomized fuel to the transfer port. A central computer read temperature, altitude, engine temperature, throttle position and RPM. With that data, the computer programmed ignition and exhaust valve timing for optimum performance.

While these were the key engine developments, Ski-Doo also upgraded its base Rotax fan-cooled twin by adding 50 more cubic centimeters of displacement, changing from piston porting to reed valve intake and moly-coating the pistons.

The model year 2003 saw change that led to what Ski-Dooers ride today. The REV platform has now evolved to the 2013 mountain-specific and trail specific chassis used in the latest Summit and MXZ models. Suspension technology has gone beyond the various SC-10 options to rMotion and tMotion designs. Engines are much cleaner as Ski-Doo and Rotax blew past semi-direct injection in favor of cleaner, more efficient direct injection two-stokes. In fact, chassis-wise little remains from 2003 as the REV platform evolved to handle all Rotax powerplants and new drive systems like the eDrive.

Truth is, José Boisjoli was correct in his assessment that the REV would shake up the industry. Look around at the 2013 product, there is a definite REV influence in the way we ride now.