How To Rock A Snowmobile Swap Meet 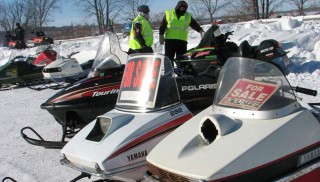 Some tips from veteran snowmobile swappers

Think of snowmobile swap meets as the ultimate garage sale for snowmobilers. While the focus will be on virtually all things snowmobile, the reality is that you can pick up everything from a microwave, an old cathode ray television to a vintage Sno-Jet. And the price is always negotiable.

At least that’s what inveterate swappers and hardcore sledders Steve and Rob Dubbs tell us. These two seemingly tireless snowmobiling veterans from central Minnesota were plotting strategy for their attendance at the upcoming Hay Days event the weekend of September 7-8 when we ran across them recently. Rob just bought a new sled, but needed to sell off his old one. So that would be loaded on his trailer and headed to Hay Days, He also planned to offer an original Yamaha Sno-Scoot and a 1969 Ski-Doo Olympique 320 SS, which was in pieces as a result of a restoration gone cold. Steve was looking to sell off some Klim gear and assorted parts. 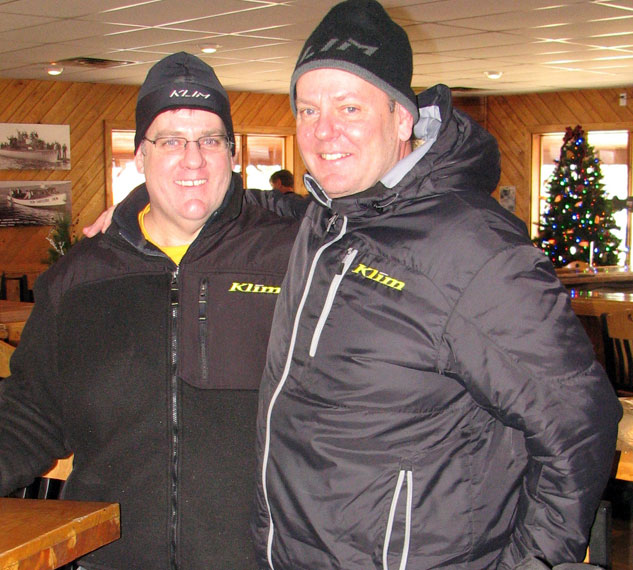 The Dubbs brothers, Rob, on the left, and Steve have been riding snowmobiles since they were kids and know the trails in central Minnesota as well as any guide. When not out riding, they swap tales and sled gear at swap meets and also sponsor the annual December SNOW film festival in Wahkon, Minn.

These two men not only average anywhere between 3,000 and 5,000 miles per winter, snow willing, but they are among the founders of the Somewhere North of Wahkon (SNOW) snowmobile film festival which is held annually the second weekend of December at Muggs of Mille Lacs, one of the premier pit stops off the famed Soo Line snowmobile trail. Yes, they ride often, hard and put on the miles. They began riding back in the 1970s as youngsters at the family’s resort and can be called true snowmobile enthusiasts.

“I just love it,” says Rob, the younger Dubbs, who operates Muggs of Mille Lacs when not riding the hundreds of miles of local trails. “I used to average 5,000 miles per season, but I bought a business and that dropped my average mileage to about 3,000 miles annually. I’m excited to get to Hay Days and see what’s new in sleds and gear. It’ll be my first actual ‘vacation’ this year.” 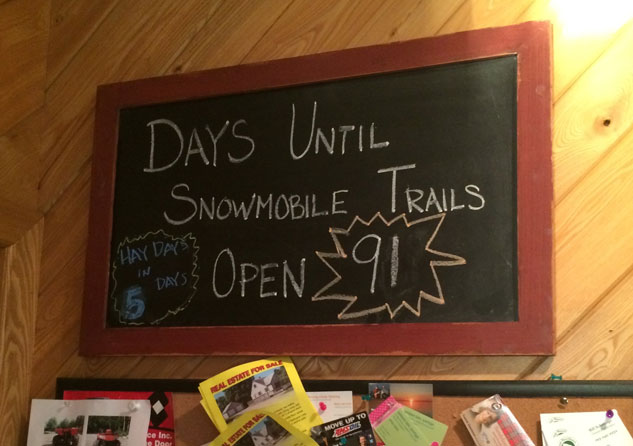 Averaging between three and five thousands riding miles per year, the Dubbs brothers take their snowmobiling seriously, even posting the number of days until the local area trails will open.

While Hay Days is the ‘big” swap, the Dubbs brothers have visited other swap events, including the annual Waconia vintage snowmobile show held in late January every winter.

“Hay Days will attract upwards of 75,000 people and the Waconia event gets tens of thousands, too. But they come when the temperatures may be 20 below zero,” said Steve Dubbs.

It’s the 75,000 plus snowmobilers that pack the Hay Days venue that gets the Dubbs’attention. Over their years of working the event’s swap, they’ve learned some lessons to help them leave with an empty trailer. Unless, of course, they picked up a good deal.

Since Hay Days sells out its swap spaces ahead of the event, you need to register for a spot early. Rob noted that Hay Days’ swap spaces were sold out by August 18th this year, after going on sale June 1st. Where events pre-sell swap space, you need to know the closing dates and act in a timely manner to assure yourself of a spot. 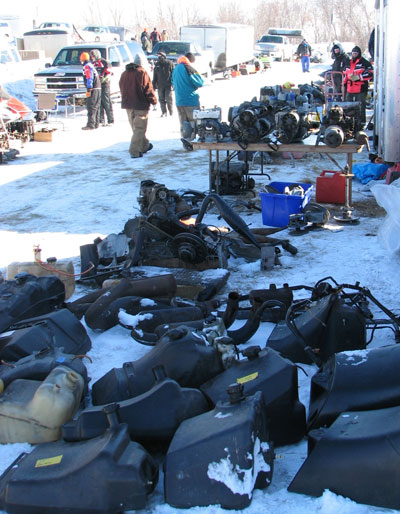 Depending on how you look at tables of old snowmobile items, they simply can be junk – or treasures that will fit your renovation project.

Steve adds that you need to plan ahead and buy enough space. Hay Days sells spots in specific lots. If you have a long tow vehicle hooked to a four-place or six-place trailer, know the total length and order the appropriate space.

As for what sells, the brothers noted the obvious, snowmobiles and sled gear. “If people can identify what parts go to, they’ll buy,” Steve adds. “We’ve found that most swappers looking to buy know what they need or want. Seats, gauges, windshields, skis and such will sell because people may either be retrofitting an older sled or they want a set of more colorful plastic skis or something.”

One of the keys to swap smarts is knowing the value of what you’re selling. Conversely, you should have a good idea of what the things you want to buy are worth. The brothers figure that you can’t be married to items to that you bring to a swap meet. If you really don’t want to sell an item, leave it home. But, you need to have a price range in mind that gives you a top profit, a fair profit and a walk-away take it back home number. You need the price range because, like at a garage sale, swappers expect to negotiate, knowing that your asking price is not the price that you’ll accept. 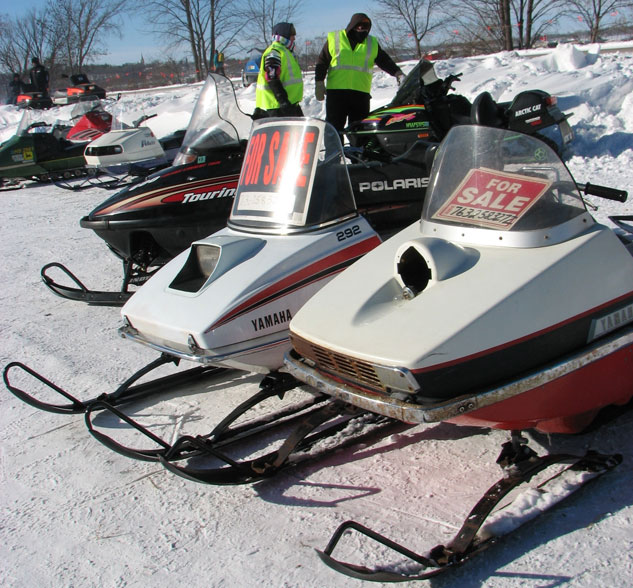 Serious swappers and those looking to venture into vintage snowmobiling can find a smorgasbord of sleds at “classic” events like Hay Days and Waconia’s annual sled ride-in event.

“LIke us, as sellers, we see most buyers looking for specific items and having a very good idea of value and a range of what they will pay. If a swapper is new to snowmobiling and looking to get into the sport, he rarely comes alone. He’ll be with a group of friends who can help him determine if, for example, a used sled is a good value or not. They’ll point out wear items and help him check out the sled’s overall condition,” explains Rob.

Frequently people will look once, move on to check out alternatives, return to see if your item has already sold, move on again and, perhaps, return. Remember, there are 75,000 people shopping for bargains at Hay Days, so don’t be discouraged. Steve says that bright and early when the swap meet first opens on Saturday morning, there’s a huge rush of people that slows down by midday.

While it may seem obvious, one tip to getting top value for your items is presentation. If you are selling a sled, clean it. Putting sweat equity into your ‘for sale’ items always pays off, says Rob. “If you have gear on the sled like a tank bag, handlebar bag or handlebar gauntlets, take them off and sell them separately.” 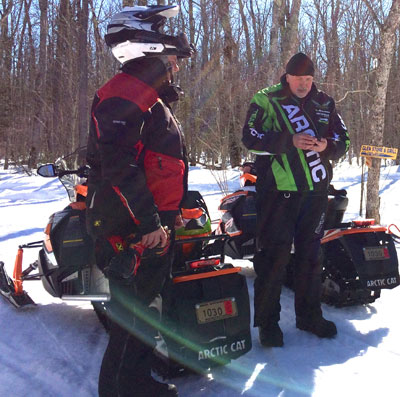 Although he rides a Polaris, Steve Dubbs will talk sledding and offer trail directions with any rider he comes across, even a Cat rider!

The brothers explained that since KLIM snowmobile gear rarely goes on sale, KLIM apparel and gear is a very popular seller. Even items such as original equipment suspension springs, skis and such move well.

With the brothers planning a vintage sled rally as part of SNOWfest 2014 in Wahkon this winter, we expect that the Brothers Dubbs’ trailer will not being going home empty after Hay Days. They may be checking out vintage gear at Hay Days for themselves so they can look the part for the vintage rally.

With more than a decade of swap experiences, the two brothers have learned not to be surprised at what sells and gets bought at Hay Days and other swap meets. Plan ahead, offer clean, used equipment and gear, be patient and be willing to negotiate – and walk away if necessary. It’s all part of how you can rock any swap meet and leave with a profit.